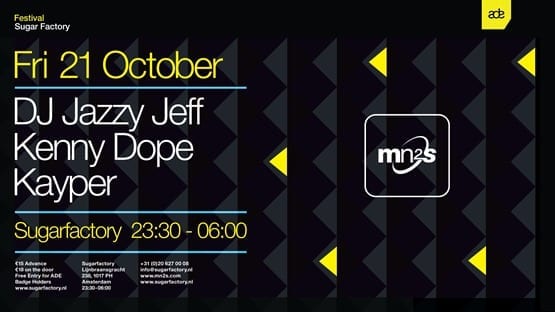 International music and talent booking agency, MN2S, will deliver a speaker-shaking event as part of the Amsterdam Dance Event 2016 – “MN2S Presents: presents DJ Jazzy Jeff & Kenny Dope”. Taking place at The Sugar Factory on Friday 21st October, also with the technically flawless DJ Kayper on the bill, the event marks MN2S’s 11th outing at ADE as a firm favourite on the ADE party programme. Previous events have set the benchmark high with the likes of Kerri Chandler, David Morales, and Frankie Knuckles to name a few, and this year is set to follow suit. Tickets are now on sale from 15€ from bit.ly/MN2S-ADE2016

DJ Jazzy Jeff is one of the world’s premiere DJs, with a back catalogue of chart hits and underground classics. He has stayed on the top of his game for decades, working with artists such as Jill Scott, The Roots, KRS One, and of course Will Smith as part of the legendary hip-hop duo DJ Jazzy Jeff and the Fresh Prince.

With the Fresh Prince, DJ Jazzy Jeff was the first hip hop artist to win a Grammy, and took to the decks for genre staples ‘Summertime’, ‘Boom Shake the Room’ and ‘Gettin Jiggy Wit It’. DJ Jazzy Jeff’s solo albums are highly acclaimed for their rich production, and his magnificent DJ sets are renowned for their infectious joyful energy.

DJ Jazzy Jeff’s skills behind the turntables are second to none. He has judged the Red Bull Thre3style DJ competition multiple times, and he has strived to encourage the next generation of progressive music makers through his Playlist Retreat and A Touch of Jazz production company.

Alongside Jeff will be Grammy-nominated genre-buster Kenny Dope of legendary duo: Masters at Work. True to their name, Kenny Dope and Little Louie Vega released a masterful string of original productions and remixes under the Masters at Work name, including work with the likes of Michael Jackson, Madonna, Daft Punk and Donna Summer. With MAW and in his illustrious solo career, Kenny Dope popularised the latin-infused beats and joyous lead vocals that now dominate the house landscape and set dancefloors alight around the world. He is famed for his ‘Anything Goes’ DJ sets where he skips through genres effortlessly, reflecting his eclectic influences, and making every night one to remember.

Third on the bill is turntablist and BBC radio presenter Kayper. The London-born DJ's hits include 'Gimme Some', 'Someone' and 'Magic Faces'. Already a booth veteran, Kayper started DJing when she was 12 and played Ministry of Sound when she was just 16. Her fans include Drake and Diplo, and her sets include everything from 90s R&B to the deepest house. She has recently released on Blonde’s Eton Messy label and produced remixes for Universal and Virgin.

MN2S event has consistently brought some of the globe’s biggest DJs together at one of Amsterdam’s finest clubbing institutions for ADE. The 2016 event is not to be missed so grab limited pre-sale tickets before they run out from bit.ly/MN2S-ADE2016