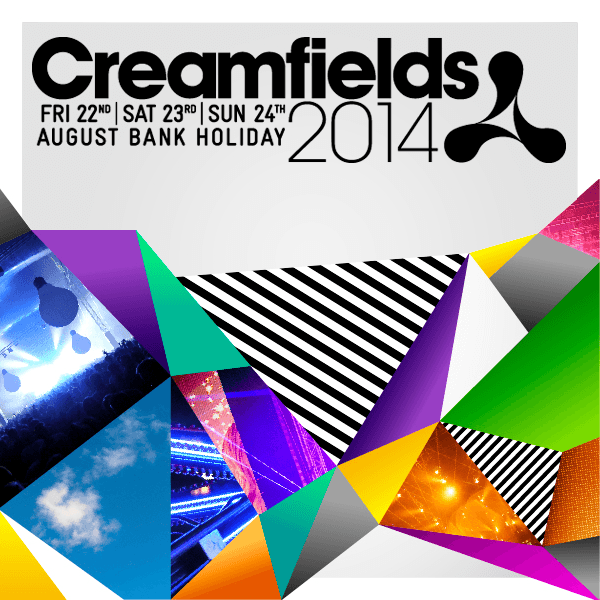 Following its 4th consecutive sell-out in 2013, the mighty Creamfields once again returns to Daresbury in Cheshire this August Bank Holiday weekend with its biggest electronic line up to date, featuring an array of exclusive performances from some of the world’s biggest dance acts.   Voted the UK’s #1 dance festival (UK Festival Awards 2013), Creamfields have once again pushed the boundaries across the board from line-up to production and overall festival experience, introducing a host of new arenas and the world’s biggest outdoor stage.

Headlining Saturdays South Stage is Avicii, this Swedish born DJ/Producer has raised the bar with his epic live shows over the last 12 months following his sell out ‘True’ tour, in addition his studio skills have turned this 24 year old into a household name and one of the world’s most in demand producers, following the release of his track ‘Wake Me Up’ which topped the charts in 22 countries and was the 2nd most streamed song in the world on Spotify last year.  Over on the North Stage we welcome Canadian born electro pioneer deadmau5, this dance music phenomenon has gone from an emerging underground talent to an internationally recognised superstar in but a few years, with a penchant for headgear and famous for global hits including ‘Ghosts n Stuff’ and ‘I Remember’, expect a mesmerising performance of some classic deadmau5 and music from his soon to be released new album.

Proceedings continue on Sunday with an unmissable performance from chart topper Calvin Harris.  The Grammy award winner and multi-talented DJ, producer, singer, songwriter returns to headline the North Stage. Whilst over on the South Stage we welcome back Creamfields favourite Tiësto, always a guaranteed crowd pleaser with his renowned productions and stage show, expect an all new feast for the senses this year.

The Swedish flag continues to fly high at Creamfields this year, first up we have ‘Departures’ from Axwell and Sebastian Ingrosso who will be unveiling their brand new arena at this year’s Creamfields, playing back to back to finish the summer in style. They will be joined by the likes of Alesso, Dirty South, Otto Knows and Oliver Heldens. Departures was born last summer on the White Isle at Ushuaia Ibiza where Axwell and Ingrosso played to sold out crowds every Wednesday at the infamous poolside venue. This year they touch down on UK soil to play a staggering 10 thousand capacity, 360 production tent taking over Sunday at Creamfields.  Next up we have Steve Angello who returns on Saturday with his Size Matters Arena bringing with him an array of talent from the Size stable including AN21, Max Vangeli, Third Party, Tim Mason Qulinez, Dimitri Vangelis & Wyman.  Renowned for their unique and visually creative performances these guys have gone down in dance music history and we can expect the same high level of production and SFX to be unveiled across these arenas this summer

A key part of Creamfields success is keeping the format fresh, and this year is no different with the introduction of 5 new arenas, as well as Departures on the Sunday, we are pleased to announce that the flag bearer of the trance movement Armin van Buuren will be debuting his own arena ‘A State Of Trance’, joining this Grammy nominated dutchman will be Aly & Fila, Cosmic Gate, Andrew Rayel, Ørjan Nilsen, Jochen Miller and Marlo to name a few.   Another new arena unveiled on Saturday is ‘Revealed’ hosted by Hardwell who will be performing exclusively for Creamfields this year, this will be the first of 2 performances across the weekend.   Over the last decade Hardwell has risen up the ranks to be crowned the world’s #1 DJ in the 2013 DJ Mag Top 100 poll, cementing his position as the electronic scenes newest superstar DJ and becoming the youngest ever winner of the coveted award, he will be joined by friends W&W, Dyro, Dannic, Deorro, Sick Individuals, Jordy Dazz and Thomas Newsom to name a few.

Another new addition to this year’s roster of new arenas and debuting their first soiree out of the capital is London Warehouse Events aka LWE who for the last few years have been making waves across the London clubbing scene with their forward thinking events, bespoke production and diverse line ups, representing them will be Seth Troxler, Adam Beyer, Better Lost Than Stupid aka Martin Buttrich, Davide Squillace and Matthias Tanzmann, the Martinez Brothers and Magda whose ethos of avoiding all of the rules has enabled her to create a niche sound.

Joining Avicii and completing Saturday’s line up on the South Stage will be a UK festival exclusive from Grammy award winning DJ/Producer Afrojack, an iconic name in electronic dance music whose become an outdoor stage regular of recent years, future hero Martin Garrix whose 2013 breakout international single ‘Animals’ climbed to the #1 spot on Beatport and impressively held the spot for four weeks, along with Cazzette, Rebecca & Fiona and Syn Cole.   Whilst joining deadmau5 and completing the line up over on the North Stage will be Steve Aoki whose acrobatic crowd surfing stunts and debauchery add to the party atmosphere (prepare to be caked!), Showtek whose electrifying performances and unique sound has turned these brothers into an act producers far and wide want to work with, BBC Radio 1 supremo Zane Lowe, GTA and Gareth Wyn.

Completing Sunday’s North stage line up and joining Calvin Harris will be everyone’s favourite party DJ Fatboy Slim returning to Creamfields after a 5 year hiatus no doubt with a bucket load of bells and whistles, he’ll be joined by Belgian duo Dimitri Vegas and Like Mike who undoubtedly delivered one of last year’s stand out performances.  Whether its wreaking havoc across the globe, showering fans with seemingly endless bottles of champagne, or ripping up the music charts with immense original tracks, unbelievable collaborations and huge remix cuts from the A-list elite, this duo have become one of the leading lights in the new wave of international dance music currently taking the planet by storm and bringing some much needed girlie glamour to the stage Nervo.

Joining Tiësto on Sunday’s South Stage is the world’s #1 DJ Hardwell for his second performance of the weekend, Danny Avila, Moti plus Grammy and VMA nominated producer Tommy Trash, now a Creamfields regular and with Platinum records around the world, singles on labels ranging from Axtone to Fools Gold, from Refune to Mau5trap, every new instalment of his diverse floor filling productions lay testament to the pride this Aussie takes in his blazing musical legacy.

Eric Prydz returns on Saturday with his Pryda arena with a contingent of friends to complete what will be one of the most eclectic arenas on site this year, which includes Maceo Plex, Scuba, George Fitzgerald, Jeremy Olander and Fehrplay who will be performing back to back plus special guest Maya Jane Coles.  Queen of the airwaves Annie Mac is back with her arena jam packed full of acts that are guaranteed to get you rocking including Skream, Breach which is the alter ego of Ben Westbeech, Paul Woolford, Route 94, Friend Within, Karma Kid and Monki.  Whilst King of the airwaves Pete Tong returns with a cutting edge line-up that includes Sasha, Joris Voorn, Claude von Stroke, Hot Since 82, Justin Martin, Jaymo & Andy George.

Other highlights across the weekend include the colossal Cream Arena which returns in all its glory with a back by demand line up of dance music stalwarts including Cream Ibiza resident Paul van Dyk, Ferry Corsten, Markus Schulz, John O’Callaghan, Rob Harnetty plus special guest Paul Oakenfold.  Dust off them superhero outfits because Laidback Luke’s Super You&Me Arena is back with performances from Dirty Dutch sound pioneer and double MOBO award winner Chuckie, DVBBS, Blasterjaxx, D.O.D and a debut performance from rising stars Ibranovski & Badd Dimes + more to be added.

Always at the forefront of fresh new music BBC Radio 1’s Mistajam is back with his Speakerbox Imprint featuring an eclectic mix of music including a debut performance from arena headliners Gorgon City, expect heavy hip swinging rhythms and butt-shaking bass for a set celebrating the very best aspects of the mid-tempo melting pot that makes girls wriggle and boys giggle, joining the party will be MK, Jaguar Skills, Shy FX, a performance from one of the original pioneers of the UK’s garage movement which has seen a huge revival in recent years DJ EZ feat. Majestic , Wilkinson, B.Traits and All About She + more.

For those who like worshipping at the alter of Hard dance, then Goodgreef Xtra Hard will be your church with performances from Kutski, the Tidy Boys who will be delivering a classic set celebrating 15 years of Hard House along with Alex Kidd, Andy Whitby, Steve Hill, Mark EG vs Proteus and Cally Gage to name a few.

Disco Kings Hed Kandi are back as Hospitality arena hosts which will put a smile on the faces of all those who prefer a more luxurious festival experience, so get your hands in the air and get your souls fired up for the mother of all VIP parties!

As if all of this isn’t enough to get you salivating we’ve yet to reveal the Friday night line up which will be coming soon, however, we can tell you that as well as the world’s biggest silent disco returning on the Friday night which sets the fun factor level for the weekend, this year will also be the first year Friday night will have audible arenas – Boom!