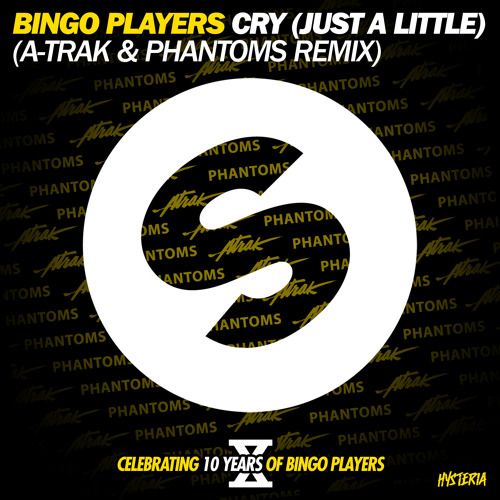 Continuing Bingo Players’ 10 Year Anniversary celebrations, A-Trak and Phantoms have raised a toast to a Bingo Players’ classic with their 2016 remix of ‘Cry (Just A Little)’ – out now on Spinnin’ Records x Hysteria Records.

As one of Bingo Players’ most illustrious cuts, ‘Cry (Just A Little)’ helped solidify the DJ duo’s position as two of the most exciting and in-demand producers of the time. Adding a Future House flavor to the 2011 smash-hit, A-Trak and Phantoms have breathed new life into the track, which still fills dance floors five years after its release. It’s no surprise that Maarten Hoogstraten was so keen for these two to work their magic on ‘Cry (Just A Little)’, as the remix offers a fresh spin on the original, blending intricate percussion patterns, bubbly bass and the iconic vocal hook.

Smashing through 2016, Maarten has already received widespread acclaim for his 2016 Re-work of ‘Tom’s Diner’, which was supported by some of the world’s biggest DJs, including Hardwell, Afrojack, Dimitri Vegas & Like Mike and Oliver Heldens. His first release of the year, ‘Lone Wolf’, has amassed over 1 million plays on Spotify alone. Playing sets all over the globe, Maarten has completed a bustling Asia Tour, hosted a special Bingo Beach edition at Governors Club in New York in collaboration with F*ck Cancer and has been hosting his Bingo Beach Residency at Rehab Beach Club at The Hard Rock Hotel in Las Vegas. With the release of the full 10 Year Anniversary EP on the horizon, stay tuned for other remixes and collaborations coming up from this sonic innovator very soon!