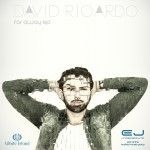 EJ Underground Records present David Ricardo, an Italian DJ Producer who’s debut release on this imprint contain two deep house tracks that are testament to his skill as a producer. Two tracks make up this EP with Far Away and Edmund, both being a smooth journey that really take you away. An Instrumental version of Far Away also included in this package.

From when he was very young, his family noted his musical talent, pushed him to study the piano and guitar. When he was 13, his cousin, a well-known DJ in Perugia (Italy) in the 90s, gave him a console and some Techno and House discs to mix: from that moment his passion for music took over and he became a DJ.

His musical influences come from two different worlds: the instrumental one that includes Pop, Rock, Funky and Soul and the electronic one that includes Techno, Progressive, Minimal and Underground music. Recently he has totally dedicated himself to the study, elaboration and realization of exclusive Deep House sounds.