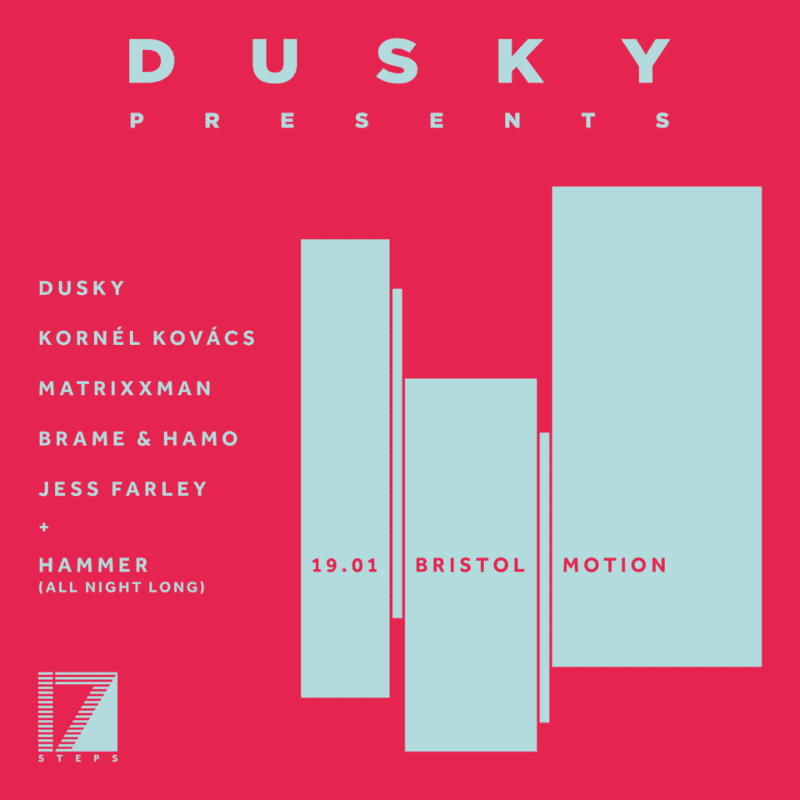 Set to take over the Motion confines once again, the behemoth dance duo of Dusky make their long-awaited return to Bristol on 19th January. For what will be their first Bristol show since their sold out 17 Steps label party all the way back in April, Dusky join the likes of Kornél Kovács, Matrixxman, Hammer, Brame & Hamo and Jess Farley for a night that's not to be slept on.

Ever since Dusky broke through with 'Flo Jam' back in 2011 they've been on a "two-man mission to conquer the world," as Mixmag once put it. Their quest toward global-domination, it seems, involves a flurry of releases through Dirtybird, Anjunadeep and Aus, DJ sets that's taken them from Panorama Bar to DC10, and an award along the way, picking up the coveted 'DJ Mag Best Live Act' trophy in 2016.

17 Steps, Dusky's label imprint born in 2014, has become a homestead for house and techno that fills big rooms and festival stages the world over. Alongside the pairs own stand out productions, Bwana, Velvit, Trevino, Christian Piers and Lo Shea have all been welcomed releases on the label across the years, making 17 Steps a go-to destination for future-facing house and techno music in the UK.

With that, we can't wait for their return to the Motion enclaves alongside esteemed Swedish producer and ⅓ of Studio Barnhus Kornél Kovács, the Dekmantel-affiliated Matrixxman, Berlin's Brame & Hamo, and local legend Jess Farley. Over in the Tunnel, the Feel My Bicep wonderkid Hammer will be on the controls all night long making this show a tantalising proposition for any dance music fan.