Fabric: Announcing the second wave of artists coming to Saturdays in 2018 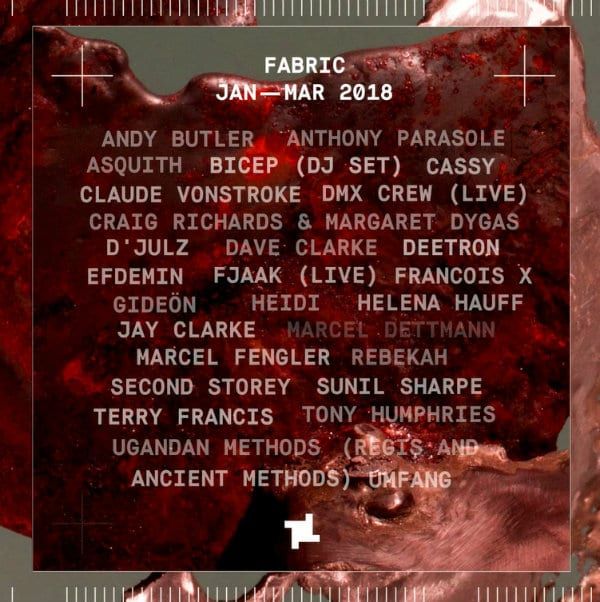 Fabric: Announcing the second wave of artists coming to Saturdays in 2018

The second in our announcements for the programme for Saturday nights in 2018 fills the gaps from the January and February events and also reveals the rest of our line ups through to the end of March.

Bicep will be returning to Room One on 24th February on the back of their incredible debut album that so perfectly brought together the heady reaches of IDM and club music. They’re joined by Hercules and Love Affair’s Andy Butler and Gideon. On 20th January Nicolas Lutz and Craig Richards have invited DMX Krew along to their All Night Long session in Room Two with an hour’s live set while the pair will be playing the first and last record of the night.

We’re also excited to announce another All Night Long session which will see Margaret Dygas and Craig Richards combine in the Room One booth on March 17th. This joins our series of All Night Long DJ pairings which are peppered in the first half of the year’s events.

Elsewhere we welcome a DJ to Saturday nights who’s had a heavy impact on dancefloors around the world in the last year as Helena Hauff comes to Room Two armed with her heady collection of electro. She’s joined by Umfang who has been building respect in her own right for her raw-edged and pacey selections.

Covering the weightier end of the techno spectrum Marcel Dettmann and Dave Clarke join us for their first dates in 2018 and Ugandan Methods (Regis & Ancient Methods) Rebekah, Sunil Sharpe, Anthony Parasole, Efdemin and Francois X are also all slated to perform.

Plus our favourite jack specialist Heidi returns to EC1 along with Claude VonStroke, Houndstooth’s Second Storey, Dennis Ferrer and many more.

Full listings for the year so far below, with new additions in bold. More soon.