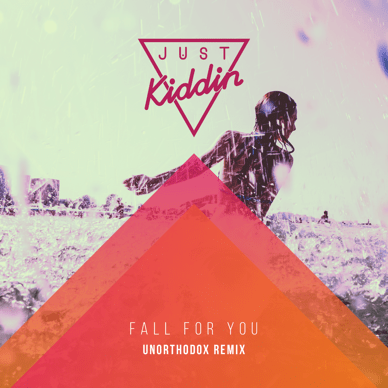 Just Kiddin return this July to unveil the next remix of their summer tinged single “Fall For You.” The London-based producer, Unorthodox, has switched up the track into a more dance floor ready cut. Leading with the original piano heavy melody, things quickly escalate into something much more brooding and synth-heavy.

Coming in hot off the coattails of a massive 10 date North American tour, a festival appearance at Electric Forest and the huge success of “Only For You”, Just Kiddin return this summer to share their latest sun-kissed single “Fall For You.” Premiered by MTV, and released via Columbia Records this May, “Fall For You” offers all the elements of the quintessential summer house tune; melodic chimes, emphatic horns, arpeggio synths and undeniably catchy vocals.

The UK based duo started off 2016 in fine form with their self-released single ‘Only For You’ going straight to #2 on HypeMachine and achieving over 2 million plays on YouTube and Spotify. Over the past few years, they’ve garnered support from key tastemakers including Gorgon City, The Magician, Duke Dumont, Pete Tong and Annie Mac proving that Just Kiddin have more than earned their stripes as an industry favorite. “Fall For You” is the addictive summer anthem with an edgy pop appeal that you’ve been waiting for.