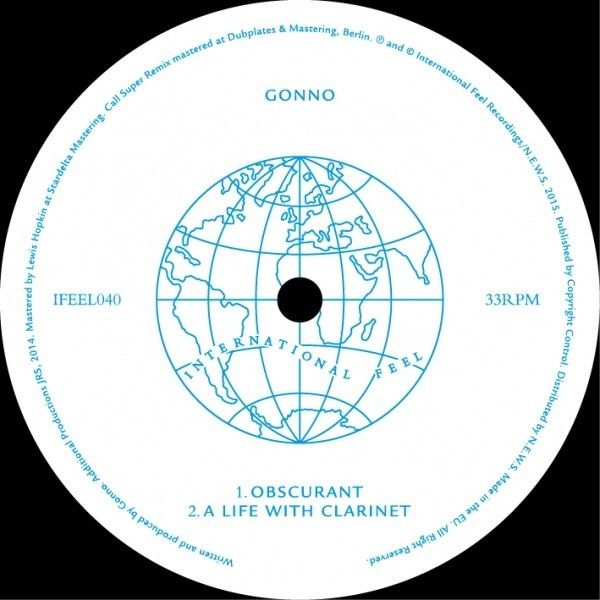 Mark Barrott (Founder of International Feel) ­ I​n the winter of 2011 Gatto Fritto sent me a link to a Laurent Garnier radio show, insisting that I check out a track called ‘Acdise#2’ by a Japanese artist called Gonno. He couldn’t quite believe that it was still unsigned.

I listened…..and neither could I. So we contacted G​onno and he agreed to a joint release between I​nternational Feel and B​en’s Fritto Morto label. Over the Summer of 2011, Acidse became a BIG tune, played by everyone from J​ames Holden to T​odd Terje,​T​im Sweeney to E​wan Pearson and everyone in­between. And then I waited for a follow up and waited……and waited.

Fast forward to Autumn 2014 and out of the blue a new Gonno EP dropped into my inbox and yes, it’s worth the wait. As hypnotic & compelling as Acdise, ‘Obscurant’ is slo mo electronic S​teve Reich packed with drama and moments of joy and ‘A Life in Clarinet’ oozes so much emotion it almost overloads your system.

To complete the release I was thinking about a remix and really fancied J​.R. Seaton esq., friend of G​atto Fritto and purveyor of fine melodic techno. Riding high after last years acclaimed ‘Suzi Ecto’, he’s not one to take on remixes, but on speaking to him, serendipity stuck, as I found out that he was the one that put G​atto​onto the original Acdise track!

And so, full circle and here we are an amazing new release with a fantastic remix. Let’s see if we get anything else out of G​onno before 2020! If not and it’s this good when it arrives…..I don’t care.