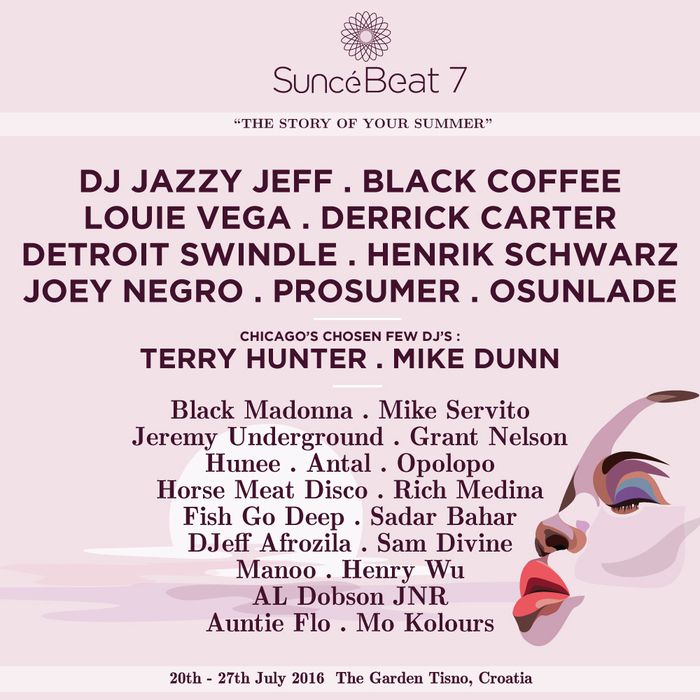 From the collective that brought you Southport Weekender, Croatian-based SuncéBeat has announced yet more names to the line-up set in the stunning location of The Garden Tisno held on the 20th – 27th July.

As one of the leading purveyors of contemporary African and Latin American sounds, SuncéBeat are very excited to announce that DJ/producer Brian d’Souza, aka Auntie Flo, will be joining this year’s line-up. Having recently been referred to as a central figure in the ‘new strand of club music fusing electronic and world influences’ by the Guardian, Auntie Flo feels like a perfect addition to the festival.

Joining him is Anglo-Mauritian producer, singer and percussionist Joseph Deenmamode aka Mo Kolours who’s self-titled debut album was praised as one of the year. His thrilling approach to music has taken him to clubs and festival stages from Brighton to Brisbane, as well as to the BBC’s hallowed Maida Vale studios.

Adding to the line-up is South Londoner and 22a extended family member Henry Wu, a producer whose sound has been championed by the likes of Gilles Peterson, LeFtO, Jimpster and Detroit Swindle. Drawing from different ends of the dance music spectrum and refusing to be categorised into any genre, you can expect Wu’s diversity to be a key feature of his DJ sets.

Also on the bill is beatmaker Al Dobson Jr, an artist who has cut his teeth among the best. His exploration of world rhythms, abstract percussive structure and transcendental sounds educate dance floors while keeping them moving – expect his set at SuncéBeat to be filled with rhythmic expression and positive energy.

Promising a change of scenery but no change of heart, Southport Weekender’s SuncéBeat is already shaping up to be one of the year’s most memorable festivals.