R3HAB & Icona Pop - This Is How We Party 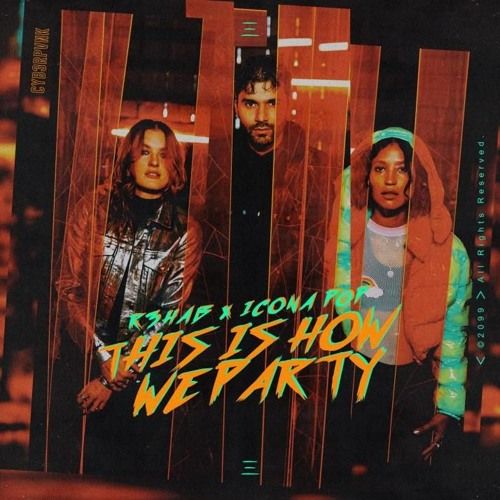 R3HAB & Icona Pop - This Is How We Party

We may be well into the beginning of 2019, but R3HAB and Icona Pop want you to party like it's the '90s. The dynamic DJ and producer teamed up with the female electropop duo of "I Love It" fame for their new collaboration "This Is How We Party," which is out on R3HAB's CYB3RPVNKlabel. "This Is How We Party" delivers a feel-good blend of breezy instrumental melodies and catchy vocals that lead into an upbeat, groovy breakdown perfect for the dancefloor. Listeners can both sing along and dance to the track, which is set to  take over the global club and radio circuit as of February 8th. The new single follows R3HAB's recent release – "BAD!" and his remix of The GRAMMY Awards nominated King & Country's "Joy," both out last month. Check out what R3HAB and Icona Pop say about "This Is How We Party" and stay tuned for new music from both artists coming soon.

"I've been a fan of Icona Pop ever since their first record release and I'm so excited to have a collab with them. This track was so fun to make and I hope everyone enjoys the positive vibe that it stands for." – R3HAB

"As kids brought up in the 90s, we wanted to honor this party anthem 'S.O.A.P. – This Is How We Party' that feels as awesome today as it did back then! This collaboration with R3HAB felt like a perfect match and bridge over to what dance music is today." – Icona Pop

Over the last seven years, the Dutch/Moroccan artist Fadil El Ghoul – better known as R3HAB – has established himself as a leader at the forefront of modern electronic music; his tracks have reached the top of many a list, his talent has been called the "future of the craft" by the likes of Forbes and Billboard, and he's circuited the globe's best clubs all without the backing of a formal record label. In 2017, R3HAB independently released his debut album "Trouble" through his imprint CYB3RPVNK, which amassed over a half billion streams globally and officially placed R3HAB among electronic music's heavy hitters. He made number 12 on DJ Mag's Top 100 list in 2018, topping the charts with tracks like "Lullaby" and "Hold On Tight," while his sophomore album "The Wave," revealing more complex, emotional and experimental layers of himself, has amassed 200m streams in its first few months of release – leading to its North American tour of the same name.

Chart-topping Icona Pop has risen in the ranks as one of the most successful international pop duos in music thanks to their ﬁrst multi-platinum hit single "I Love It" ft. Charli XCX which has amassed over 8 million singles sold. The duos songs combined has well over 663 million streams worldwide in total. Icona Pop has done live performances on NBC's "Late Night with Jimmy Fallon", NBC's "The Today Show", ABC's "Good Morning America" and CBS' "Late Show with David Letterman", and "America's Got Talent"; and sold-out worldwide tours supporting Miley Cyrus, Katy Perry, and One Direction. Last year the duo has been nominated for a Swedish Grammy for best electro/dance, won GAFFA Magazine's "Group of the Year" and hosted the biggest fashion gala in Sweden – the Swedish Elle Gala 2018.