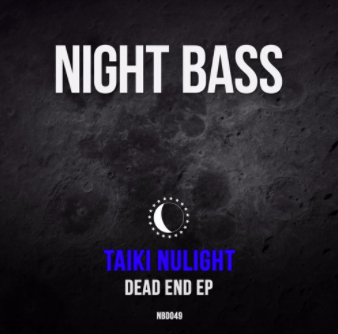 Taiki Nulight, or Erka Chinbayer to his friends, has been DJing and Producing for many years in a variety of eclectic circles. Being influenced by UK Garage, House, and Electronic Dance Music, he has created a unique trademark sound that has awarded him praise from tastemakers including Pete Tong, Annie Mac, and Mistajam of BBC Radio 1, and outlets like Billboard, Noisey, UKF,and more.

Today, the unstoppable Brighton producer returns to AC Slater's Night Bass with one of his biggest releases yet- the 'Dead End' EP. Filled with everything you'd expect and more, the four-track project is a must have for fans of forward-thinking heavy bass and crisp clean production. Aside from two epic Taiki originals, there are two can't miss collaborations with Chris Lorenzo andMikey B. 100% pure Night Bass anthem on this one.

If unfamiliar with Nulight before now, the producer is renowned for a series of original productions and collaborations with scene heavy weights such as My Nu Leng, AC Slater, Chris Lorenzo, Cause & Affect and Low Steppa. As one of the most in demand remixers in his scene from both major labels and indie’s alike, Taiki has remixed the likes of Netsky, Zeds Dead, Destructo, Shift K3Y and Keys N Krates to name a few. In addition, Nulight has been invited to perform around the globe at leading festivals including BoomTown, Electric Forrest, Forbidden Wonderland, Pacha, as well as tours in Australia, Japan and a continually busy diary across Europe playing at iconic clubs such as Fabric and Ministry of Sound.