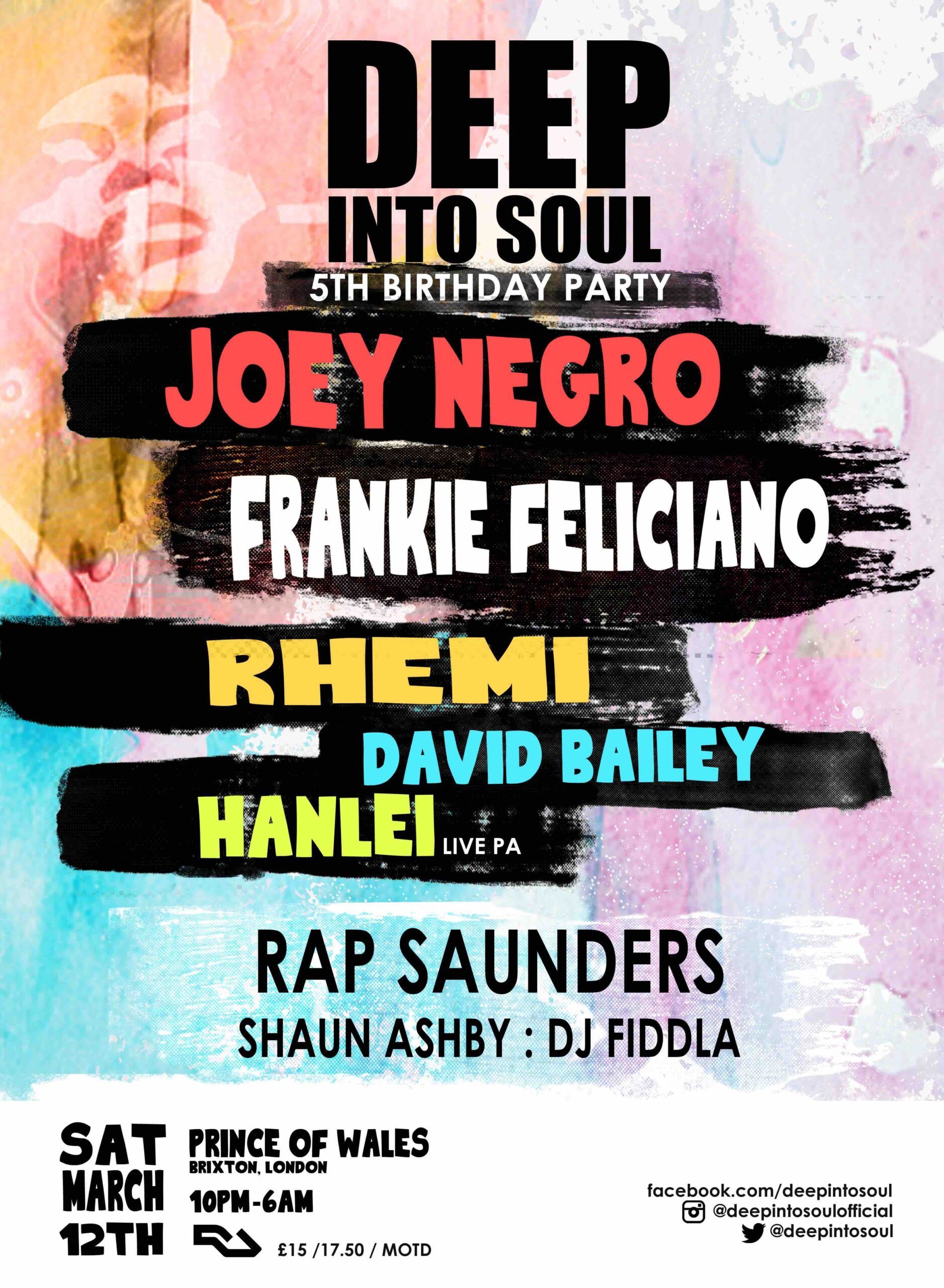 From summer Sunday daytime parties to packed Saturday night events at Brixton’s Prince Of Wales hotspot, Deep Into Soul is honking its birthday horn loud n’ proud on Saturday March 12th when it celebrates its 5th Anniversary with London’s finest, Joey Negro, New York’s Frankie Feliciano flying in for an Exclusive set with the home-grown talented Hanlei girls performing Live alongside DiS residents Neil Pierce and Ziggy Funk aka Rhemi Music. Helping them blow out the candles and party on among the balloons is afro house groove king, Rap Saunders and get ready to dance until dawn, singing along to some the finest house music the capital has to offer alongside an insanely friendly young dance crowd.

Marking this momentous occasion and following on from his recent ‘Remixed With Love’ album release, UK disco & house legend and DiS firm favourite Joey Negro is back on the decks after his sensational set at the Summer Closing party alongside DJ Spinna and Terry Hunter and headliner festival sets. Expect lots of Exclusives and Edits before NY pioneer, Frankie Feliciano jumps in with his signature deep n’ percussive signature sounds mixing it up with a set from hotly tipped residents Rhemi Music’s Neil Pierce and Ziggy Funk. The Rhemi Music duo’s Remix of Opolopo’s ‘Spare Me The Details’ is due soon on Joey’s Z Records imprint as their production star continues to rise with new releases on their own label. Rounding off Room 1’s impressive line up is an Exclusive Live performance from the hotly tipped Hanlei, whose ‘Diamond’ track produced by Rhemi Music seized the No 2 spot on Traxsource’s Top 200 of 2015.

Room 2 heads into a deeper afro house sound with Soulmates’ Rap Saunders guesting alongside the much loved party residents Shaun Ashby and Deejay Fiddla keeping the dancefloor moving with a smorgasbord of house sounds until the sun rises.

Renown for their intimate and hedonistic parties, DiS create a real party atmosphere unveiling new production on the night and surprises to celebrate this milestone in style. Bearing all this in mind, please get your tickets early to avoid disappointment, and Early Birds are only £15.00 and see you on the dance floor!!