AV AV AV - Everything Is True 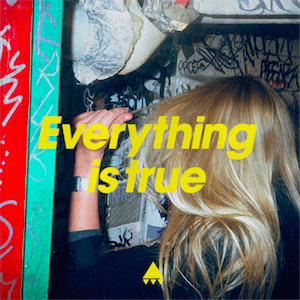 AV AV AV - Everything Is True

Following in the footsteps of ‘About You’ & ‘Habitat’, Danish trio AV AV AV (Phonetic translation – “OW OW OW”) drop ‘Total Recall’ and reveal ’Everything Is True’ EP in its entirety.

After playing several concerts last year, AV AV AV took the energy and the live feeling to the studio and recorded new songs. The result is “Everything Is True”, their latest 7-track EP.

“We played all the new songs live last year, defining our sound and came to the conclusion that we not only are a studio-band but also a live-act. We see the EP as an upgraded version of our trio, and found what we feel is the real AV AV AV sound”, Eloq explains.

For the first time they have added a vocal feature on a track : Jacob Bellens added his magical vocals on ”Love Without Reason”. So far AV AV AV have worked without vocals in a more spherical sound, however, they wanted to try using vocals as an extra instrument, so they invited Jacob Bellens into the studio with them.

”It was fantastic having Bellens recording with us and we created a new dimension in our sound. We love breakbeat and wanted to do a tribute to this genre. Chemical Brothers have been a major influence for us making this track, a track that we are very proud of”, AV AV AV explains and add the description to the other tracks here:

* ”Intet Intet” is written for our beloved Ling Ly that left us last year, far too early. We needed to remember a friend that we have lost.

* ”Habitat” was created in a big sound universe that led us in a new direction.

* We wanted to do a downtempo track and ”About You” is driven by that electronic sound.

* ”Mello” is a track that defines us and the genres that we are inspired by.

* ”Stakes” is an old demo that we started to work on which we made into a new sound.

* ”Total Recall” has been in our files ”hardcore tracks for live” for a while. Rune Rask that mixed and mastered the EP, created a new life for this track and we then figured that it works perfect as the last track of the EP”.

"Everything Is True" is available now digitally and on vinyl

About AV AV AV
AV AV AV had their debut in 2015 with the EP “They Live", which got a great deal of attention both in Denmark and internationally, with airplay on BBC's Radio 1 and complimentary words from the global producer Diplo, who referred to the music as "Future Gospel". The great interest the band received for their music resulted in sold out shows in Denmark and a sold out Club NME at KOKO in London, not to mention a list of other critically acclaimed concerts at both international and Danish festivals like By:Larm in Oslo, Sonár Reykjavik/Stockholm/Copenhagen, Spot Festival, Roskilde Festival, Tinderbox and Northside. Since then, lead single ‘About You’ from their forthcoming ‘Everything Is True EP’ has been supported by BBC Radio 1’s Huw Stephens & Toddla T, as well as Brighton’s godfather of Dance, Fatboy Slim.

This year they will play at the likes of Spot Festival in Aarhus in May and Roskilde Festival in June, following on from performances at By:Larm in Oslo & Frost Festival in Copenhagen.