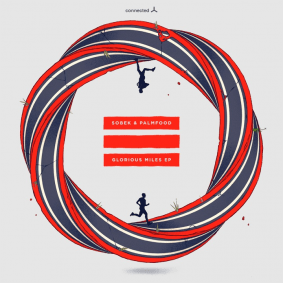 Sobek makes his debut on connected with a three track EP in collaboration with Palmfood.

Sobek has released on MoBlack and Monaberry amongst others, while Palmfood is a MoBlack and Still Vor talent artist and their meeting was inevitable: both living in Budapest and both with a shared love of deep percussive music and trail running, they have plenty of common ground. The melodic ethnic journey that is this new EP was named after their favourite hobby, running for miles in woods in any conditions and the satisfaction of completing the ‘Glorious Miles.’

The EP has already made its mark, with the title track having a play on Moscoman’s Future Stars mini mix for Pete Tong’s BBC Radio 1 show and ‘No Trail is The Same’ being played on AndHim’s CityFox podcast late last year.

That opening title track is a prowling affair with hypnotic percussion moving it forward. Ethereal synths and spacious euphoric breakdowns evoke a spiritual journey with intent that will take the floor into new and unusual places.

The equally magical ‘No Trail Is The Same’ is perhaps the second part of the journey, understated but equally percussive and sequencer based, drawing in from a repetitive, suggestive Asian rhythmic refrain that paints a picture of new discoveries and insights.

Completing this emotive musical picture, ‘Ascent Descent’ is a delicious rhythm track with sliding, talking drums and snake charmer melodies with percussive breakdowns and synth sequences that rise to a crescendo and haunting whistle.

This is multi-layered, richly detailed music that brings new influences to house music in some style.

1.Glorious Miles
2. No Trail Is The Same
3. Ascent Descent