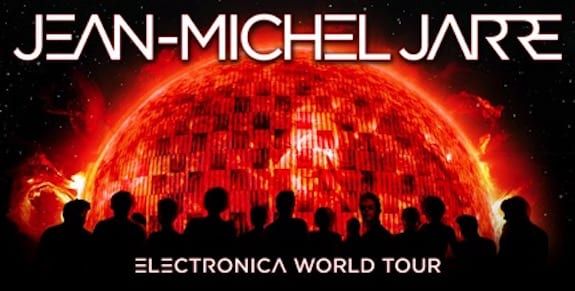 2016 will see The Godfather of Electronic Music, Jean-Michel Jarre, back with a spectacular live show for the first time in six years.  The ‘Electronica’ World Tour will kick off in Europe this October and will be preceded by some festival dates this summer.

Famed for staggering visuals and the use of cutting-edge digital technology, which has been seen by millions of people around the world, the new live show promises yet again to be a truly immersive musical journey, with Jarre set to showcase brand new music from his stunning two-part LP, ‘Electronica’, alongside classic material from milestone albums such as Oxygene and Equinoxe.

Jean-Michel Jarre’s reputation for the spectacular is unmatched, having been one of the first artists in the world to perform electronic music as we know it today. With his renowned city-scale concerts, Jarre has set Guinness World records across the globe, including one for an audience of 2.5 million in front of La Défense skyline, Paris, before going on to break his very own record in Moscow, when he played to over 3.5 million people for the city’s 850th anniversary.

With a unique and brand-new super production, Jarre will share the energy of his macro concerts with the emotions of a true arena experience in this first leg of his world tour to what seems like the entirety of Europe this October and November, with the Frenchman set to play major venues like the 02 Arena in London and AccorHotels Arena in Paris, in addition to further dates in Germany, Slovakia, Poland, Austria, Switzerland and many more. All tickets for the European leg of the ‘Electronica’ tour will be available this Friday, March 18 HERE.

The ‘Electronica’ European tour will ensue after the release of Electronica Vol. 2: The Heart of Noise this May 6, 2016. Set for release via Sony Music International, the sequel to Jarre’s critically acclaimed Vol 1: The Time Machine LP, features a whole host of celebrated artists, with Rone, Pet Shop Boys, Primal Scream, E.S., Julia Holter, Gary Numan, Jeff Mills, Peaches, Siriusmo, Yello, The Orb, Sebastien Tellier, Hans Zimmer, Cyndi Lauper and Christophe all handpicked by the man himself to complete the Electronica double album project.

Electronica Vol. 2: The Heart of Noise is now available for pre-order. For those that pre-order the album, they will receive the first and title track, ‘The Heart of Noise’, made with fellow countryman, Rone, as an instant free download.