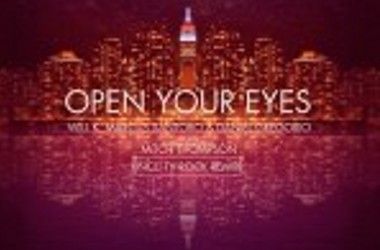 Melbourne-based underage trio Will K, Marcus Santoro & Daniel Gregorio are living proof that a new breed of Australian talent is emerging and their social stats only go to solidify that kinds are responding in serious numbers (each with their own respective fans and followers – 180,000 plays on Soundcloud & 13,000 Facebook fans collectively).

The three youngsters (with an average age of 17 years old) have released future-anthem ‘Open Your Eyes’ on Moda Music, a division of Moda Records thru an exclusive license courtesy of Neon; featuring the vocal talents of Mitch Thompson from last years season of The Voice.

On board to lend a helping hand, ARIA Award winning Aussie outfit TV ROCK make a triumphant return with their first official mix for 2013. In recent year, the duo have worked with some of EDM’s biggest names including Example, Dirty South, Axwell and Tiesto, yet this time the lads chose to work with the young and relatively unknown.

The spritely trio also took to the main stage at infamous Under 18’s Festival Goodlife (playing alongside Avicii, Hardwell, Madeon, Dimitri Vegas & Like Mike and Steve Aoki) to lift the curtain on their impending debut release.