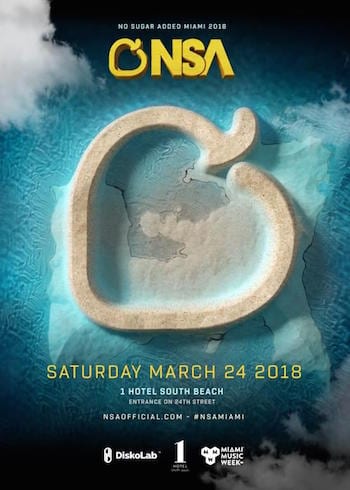 1 Hotel South Beach will partner with Diskolab to host the ultimate week long music programming during this year’s upcoming Miami Music Week.  The annual celebration of electronic music is set to take place across the city from March 21 to 25, 2018. DiskoLab will transform the hotel’s private beach into an outdoor energy-filled concert venue featuring some of the top acts in dance music. Full lineups are to be announced in the coming weeks.

A major in the annual MMW line-up comes in the form of No Sugar Added (NSA)’s annual event, with 2017 witnessing sets from the likes of Jauz, Oliver Heldens, Jonas Blue, Lost Frequencies, Autograf, and many more at Nikki Beach Miami. First launched as a pool party during WMC (Winter Music Conference) in 2009, the event switched to the Sagamore Hotel in 2010, hosting the likes of Avicii, Calvin Harris and Hardwell.

As the brand grew in popularity, it also increased in size, expanding to a two-day event from 2012 onwards, becoming one of the key go-to events of the week during Miami Music Week with fun music and beach party vibes, and a dedicated fan base looking forward to NSA’s MMW event each year. With 2018 marking No Sugar Added’s biggest line-up of all time on Saturday, March 24, the event will switch locations to a gigantic singular stage amid the luxury setting of the 1 Hotel South Beach for what promises to be the biggest NSA event yet. Tickets for the event can be purchased here.

The 1 Hotel South Beach will also host to the ever-popular ‘All Day I Dream’ event on Friday, March 23 during MMW 2018, with the brand having spent the course of the past year rocking daytime events across the globe, including Burning Man, New York, Berlin, and London. Lee Burridge and several of his familial crew of house and techno sorcerers will be in attendance to bring a dreamy sunshine utopia to all those in attendance. Tickets can be purchased here.

Joining the lineup on Sunday, March 24, will be Anjunabeach by Anjunabeats, the record label owned and A&R’d by globally renowned artists Above & Beyond, aka Jono Grant, Tony McGuinness and Paavo Siljamäki. Beginning its journey as an outlet for Above & Beyond’s own productions, the label has developed a roster of scene-leading electronic talent, kick starting the careers of artists like Mat Zo, Arty, Andrew Bayer, ilan Bluestone and Seven Lions, surpassing 500 releases and earning two Grammy nominations along the way. Tickets are on sale here.

Stay tuned for further information on Wednesday, March 21’s lineup and a very special guest announcement for Thursday, March 22 that you won’t want to miss! Visit www.diskolab.com for more info.

As one of the world's leading electronic dance music events, hundreds of thousands of people from across the globe descend on Miami during the end of March as the city transforms itself into a dance music paradise for Miami Music Week (MMW). Now in its eight year, the MMW brand unifies events in the city as every venue opens its doors for a week-long marathon of parties that collectively feature almost every major artist in the electronic dance music scene. In 2017, over 1,200+ artists performed at 300+ events, hosted at 85+ venues.

Promising to serve as the hub of MMW’s most in-demand activity, the 1 Hotel South Beach boasts 425 guest rooms including 168 studio suites and one 3,500 square-foot oceanfront presidential suite. Guest rooms at the hotel average 700-square-feet, the largest in all of South Beach.  Occupying an entire city block on Collins Avenue, 1 Hotel South Beach sits directly on 600-feet of pristine beachfront, offering unparalleled views of the Atlantic Ocean, Biscayne Bay and Downtown Miami’s ever-expanding skyline.