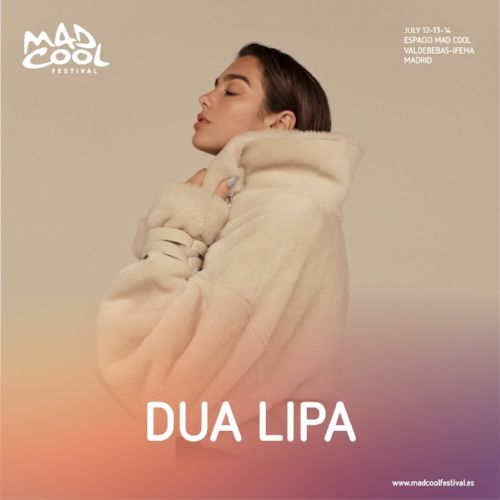 Within its wide musical scope, Mad Cool Festival 2018 is expanding its lineup further to include pop stars, legendary electronic acts and exciting rock bands alongside the very best Spanish artists.

Dua Lipa will perform at the 2018 edition of Mad Cool Festival as a breakthrough star thanks to the success of her self-titled debut album. Released last year, it brings R&B and pop together in a fresh and sexy way, and has propelled Dua Lipa into an overnight sensation, further proved by her five nominations at the Brit awards.

Post Malone, one of the most successful American musical acts to have emerged in recent years plays Madrid for the first time exclusively with Mad Cool. His style has been defined as a cross between country, grunge, rap and R&B. His last single, Rockstar, has reached four million daily plays across streaming platforms. Insane numbers for such an unconventional artist!

British duo Underworld, authentic masters of techno and trance, join the electronic billing at the festival. Karl Hyde and Rick Smith reached world fame in the 90s thanks to their hit Born Slippy (Nuxx), a generational anthem that was included in the soundtrack of Danny Boyle’s film Trainspotting. Since then they have continued to cement their status as one of the heavyweights in electronic music and an incredible live band. The British representation is also reinforced with Actress, bringing his Afrofuturism and club-ready avant-garde stylings.

We will also have Paul Kalkbrenner, the German DJ and producer who has been turning the clubbing scene upside down for decades, thanks in part to his participation in the film Berlin Calling, which grew his status internationally. In addition to the already burgeoning electronic music billing we welcome the iconoclast DJ Koze, one of the most anarchic (and respected) artists of the Cologne scene.

James Holden will present at Mad Cool Festival 2018 his ambitious new project in the company of his band The Animal Spirits, an authentic set of free jazz spiced synthesizers. We will enjoy the return to the stages of Lali Puna, project of the Korean Valerie Trebeljahr, of the minimalist proposal of the Dutch duo Weval and the Texan Bayonne.

In the national section we will have the prolific Galician producer Cora Novoa (first woman to win the award for the best DJ of the year in the Vicious Awards), the Madrid-born Víctor Santana -with his revitalization of Detroit techno- and the Alicante native Ylia, former resident of clubs such as Nitsa and City Hall in Barcelona. But there is more: ELYELLA will arrive willing to surprise us with their mixes of other subjects and their own productions.

The line up is completed with the inclusion of some big names, like the much anticipated Jet. The Australian rock band, led by the brothers Nic and Chris Cester, wrote the timeless hit ‘Are You Gonna Be My Girl?’ and have recently returned to the stage after what seemed like their definitive break in 2012. They will play the festival 11 years after their last concert in Spain.

We will also have the explosive duo of English punk rock group Slaves, the bright soul-rock of Childhood, the post-punk female combo Goat Girl and the primitivism of Gruppo di Pawloski. Pile's noise rock, the gothic sensitivity of The Ninth Wave and the experimentalism of the Chinese group Re-TROS will also be part of the 2018 edition. Representing Spanish rock music will be the psychedelic sounds of Holy Bouncer and the progressive stylings of Jardín de la Croix.

In this new round of confirmations we welcome Iván Ferreiro. The Galician singer and composer has been singing for over 25 years and has become a soundtrack for several generations of indie pop lovers. Another of the most anticipated names is that of Ben Howard, one of the most recognized British musicians of recent years thanks to his melodic folk-pop. With his first album Every Kingdom (2011) he got a Mercury Prize nomination and a Brit award for the best solo male artist.

But this is not all. The list of confirmations is completed by Chicago rapper Mick Jenkins, the melodic emo-rock of the British Deaf Havana and Milk Teeth, and R&B from Durand Jones & The Indications and the young London composer Alex Francis, who will perform for the first time in Spain.

Thanks for your support!