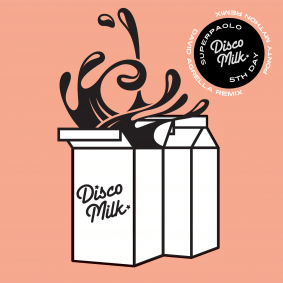 Since its formation in 2006, Disco Milk Records has embodied the tradition of producing disco, soul-funk and afro-cosmic grooves with a modern twist and that’s been solely down to the work of Italy’s Super Paolo – one half of the music duo Tutto Matto. Paolo Guglielmino aka Super Paolo plays close attention to building tracks from scratch whilst utilising a handful of live instruments and this is especially prevalent within his ‘5th Day’ single. Ponty Mython jumps on remix duties after releases on Tusk Wax, Beats Delivery, Arma and many more, in addition to David Agrella aka Agrellomatica – a DJ/producer based in London who’s music has been championed by the likes of Cassius, Anja Schneider, Hot Since 82, Steve Lawler and Marco Carola.