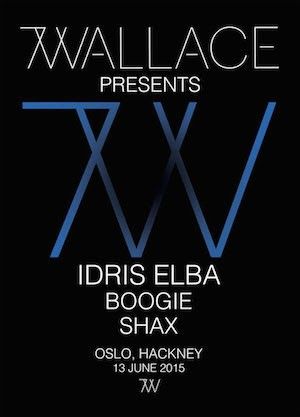 Returning to his East London hometown for a special edition of his illustrious 7 Wallace parties, Idris Elba is set to takeover Hackney hangout Oslo on the 13th June for a night of high-end debauchery soundtracked by himself, Boogie and Shax, plus secret guest to be announced. Renowned for unrivalled party vibes and named after his own old street address, 7 Wallace is also referenced in Idris’s remix of Skepta’s SHUTDOWN, released yesterday.

Now an international soiree running across London and Ibiza, 7 Wallace is all about the music; combining world-class selectors with devoted residents whose sounds span electric party flavours, from house and garage to hip-hop and funk. Expect an all night, feel-good energy in Oslo’s charismatic upstairs space, plus an unannounced guest for an extra added surprise on the night. Past 7 Wallace guests include Pete Tong, Seth Troxler, Mark Ronson, The Heartless Crew and Felix Da Housecat, who’ve all joined 7 Wallace regulars over London dates, plus across residences in Ibiza Rocks, and Pikes, Ibiza. All sets from Pikes are available via mixcloud to give a taste of what 7 Wallace is all about. Run in conjunction with renowned London party starter Rob Star (Eastern Electrics / mulletover) and with a new home at Oslo, this 7 Wallace soiree promises to be one that could not and should not be missed.

Spinning records since the age of 14, Hackney-born Idris Elba is truly at home when he is behind the decks and is fluent in the language of music, DJing internationally and with sets at Glastonbury and Goodwood Festival this year. Idris’s history stretches from running pirate radio stations in the 90’s, co-producing with hip-hop hero Jay Z and now working with grime king Skepta. Master at conducting A* parties, Idris and his accomplices are proudly bringing 7 Wallace home to East London for what promises to be one solid-gold clubbing experience.