A Weird & Wonderful Day Out Launches For 2019 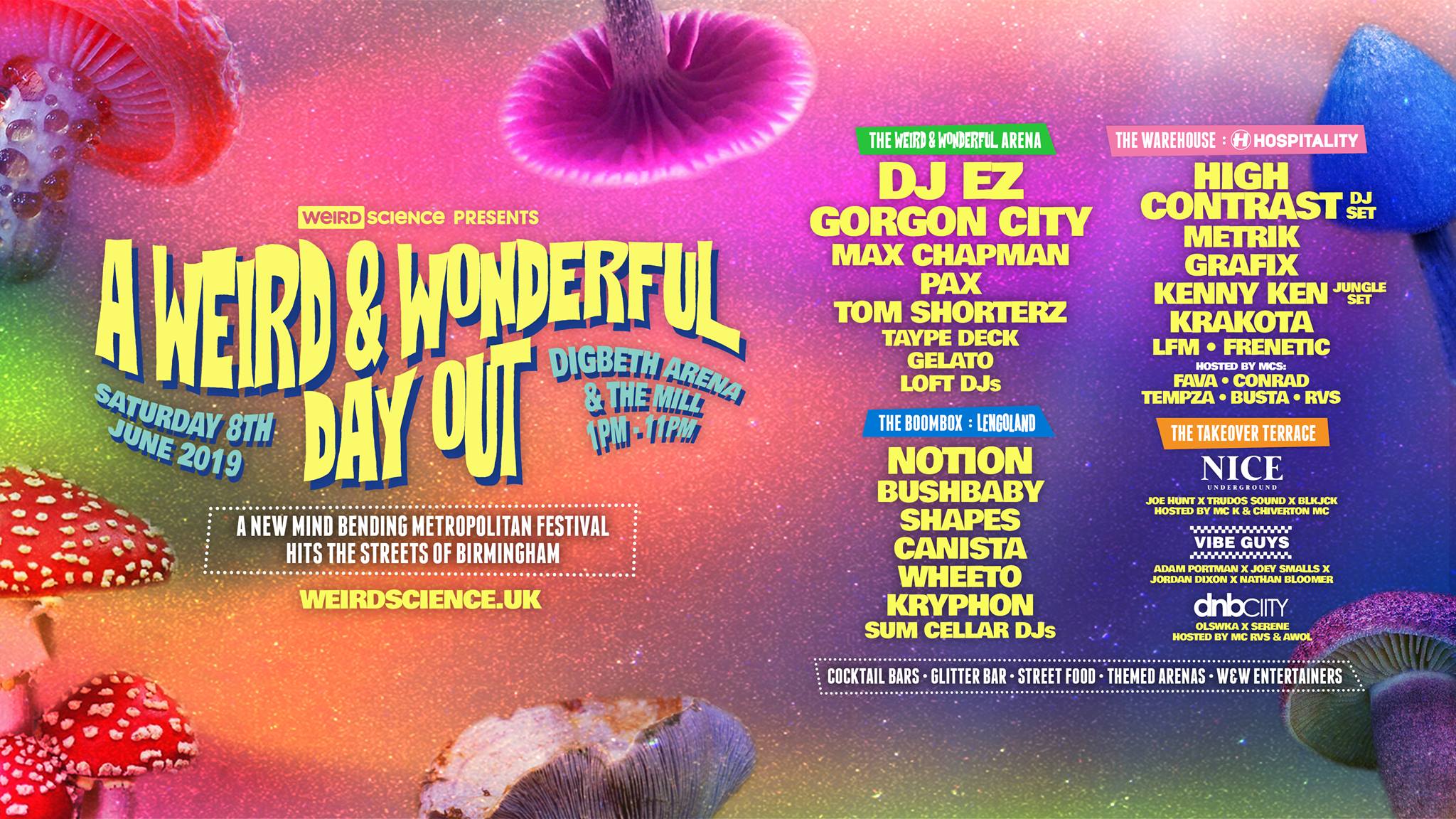 A Weird & Wonderful Day Out Launches For 2019

A Weird & Wonderful Day Out lands under the arches at Digbeth Arena and at The Mill in Birmingham, as part of the huge, A Weird & Wonderful Weekender. This new chapter in Birmingham’s burgeoning festival scene comes from Weird Science, the team behind the much-loved, MADE Festival, which explains the killer line up of UK bass, bassline, drum & bass, house and UK garage announced today. Confirmed to bring the party vibes to this unmissable, all-day mix of inside and outside partying are, in the main Arena; DJ EZ, Gorgon City, Max Chapman, Pax, Tom Shorterz, Taype Deck, Gelato DJs and Loft DJs. Then, drum ’n’ bass royalty, Hospitality take over The Warehouse, with; High Contrast (DJ Set), Metrik, Grafix, Kenny Ken (jungle set), Krakota, LFM, and Frenetic, hosted by MC’s Fava, Conrad, Tempza, and Busta. UK bass online community, Lengoland take over The Boombox, with Notion, Bushbaby, Shapes, Canista, Wheeto, Kryphon, and Sum Cellar DJs. Ready to take charge of The Takeover Terrace are; Nice Underground, Vibe Guys and D’n’B City. It’s going to be weird, it’s going to be wonderful, it’s going to be a massive party with the UK’s best DJs dropping the biggest tunes. Taking place from 1pm to 11pm, tickets are on sale now from just £30 + b/f from skiddle.com/e/13423846.

A Weird & Wonderful Day Out is part two of A Weird & Wonderful Weekender and follows the colourful and spectacular Carnival Magnifico on 7th June. Digbeth Arena and The Mill will be turned into the biggest two-day metro festival event that the area has ever seen, also providing a showcase for the best creative talent the Midlands has to offer. With MADE Festival now an established highlight on the festival calendar, A Weird & Wonderful Day Out opens another new chapter in a resurgent West Midlands’ festival scene, driven forwards by the scale and ambition of Weird Science.

irmingham’s coolest party people will head to A Weird & Wonderful Day Out to enjoy DJ EZ – Boiler Room favourite, Fabric Live helmsman and renowned DJ with unmatched technical skills and a record box bulging with garage goodness. Gorgon City hit the main Arena, fresh off the back of their hit album, Escape, and massive UK / USA tour. House hero, Max Chapman steps up to drop his trademark big room grooves, while UK duo Pax will show why their productions have appeared on the likes of Toolroom, Sola, Abode and Glasgow Underground. Local ledge and Rinse FM star, Tom Shorterz will be laying down some quality basslines for the Weird & Wonderful crowds. With Taype Deck, Gelato DJs and Lofts DJs all taking to the decks, the main Arena will be jumping all day long.

Hospitality bring some of the biggest names in drum ’n’ bass to The Warehouse. High Contrast has become one of the most respected names in the scene and remains in huge demand. He’s sure to deliver for crowds at A Weird & Wonderful Day Out. Metrik has proven his skills time and again. Annie Mac is a supporter on Radio 1 and demand for this talented artist is global. Also lining up for Hospitality is Grafix. Famed as one half of Fred V & Grafix, he’s now solo with a darker, more experimental vibe set to blow the dance floor away. Legend Kenny Ken will treat the crowd to a jungle set, showing off the skills he honed through the biggest raves since ’89. Krakota is a name to watch and comes with a big reputation of knowing how to work a crowd, while local acts LFM and Frenetic will also show why they deserve a slot under the Hospitality banner. The MC’s will keep the dance floor bouncing, with lyrical mastery from respected names, Fava, Conrad, Tempza and Busta.

Lengoland is central to the UK bass community and brings some of its brightest talent to Digbeth. Notion is a rising star and Holy Goof collaborator currently helping turn bassline into a phenomenon. Don’t miss him live. Bushbaby is at the forefront of bass music in Brighton, rising to release on UKF and deliver one of the most sought after sounds in the UK right now. DJ/Production duo Shapes will be dropping their high energy, dirty beats to put smiles on faces, while Birmingham’s own Canista will be bringing the drum ’n’ bass flavours. Wheeto is primed to prove that he’s a bonafide name to watch for 2019, alongside other rising stars Kryphon and Sum Cellar DJs.

As the name suggests, The Takeover Terrace is there for a series of takeovers, firstly from classic UK garage party brand, Nice Underground. Vibe Guys also takeover with a mix of genres from disco to techno, while D’n’B City will deliver the best drum ’n’ bass grooves.

Alongside the big tunes and top DJ talent, partygoers will enjoy a real festival vibe with weird and wonderful entertainers, incredible production and the tastiest street food. With a mix of indoor and outdoor fun, there’s no better way to spend a weird and wonderful day out.