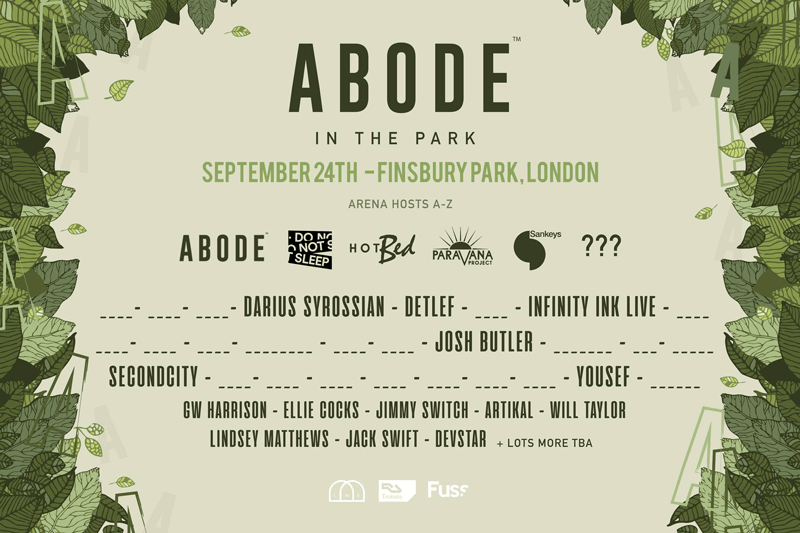 ABODE in the Park announce stage hosts and first wave of talent for their first ever festival this September at Finsbury Park.

Days get hotter. Drinks get cooler. Nights get longer. The music gets louder and friends turn into Family. As the pace quickens this summer, the ABODE announcements keep rolling in! We’re delighted to reveal the stage hosts and first wave of talent for ABODE in the Park 2017.

Since the first clubbers graced the dance floor in 2014, ABODE has been about family. From humble beginnings in Greenwich, to parties across the globe, their roots run deep and this collection of talent represents that journey.  Do Not Sleep’s Darius Syrossian, Circus head honcho Yousef and Origins Records' Josh Butler join Viva Records stalwart Detlef and pan-Atlantic star SecondCity with a special live performance from Crosstown Rebel’s Infinity Ink completing the announcement. All have performed at ABODE at various stages – some as secret guests and some as outright headliners – they’re part of ABODE's DNA. Meanwhile their always on point ressies; Ellie Cocks, Jimmy Switch, GW Harrison, Will Taylor and new addition and technical wizard Jack Swift all feature at the brand's first ever festival.

And now onto the stage hosts. ABODE will take control of the main stage while the world’s best known clubbing institute Sankeys take the reigns in the warehouse arena bringing their legendary party atmosphere and production values along with them. They’re joined by Ibiza’s renowned party brand Do Not Sleep who promise to bring that Ibiza vibe to London in the big top tent.  All will bring their own personality and all will contribute to an unrivalled and varied atmosphere.

ABODE has always been a party renowned for their no expense sparred production and attention to detail. This festival will be the pinnacle of everything before and we’re promised a Rio Carnival experience in the heart on North London. Stage performance, the biggest and best sounds systems, fire shows, imposing LED screens, next generation video mapping and sprinklings of confetti are a taste of what’s in store.

Another 20 headline artists will be announced over the coming weeks.

+ more brands to be announced soon

+ another 20 headline artists will be announced over the coming weeks.