Above & Beyond announces ‘Common Ground’ tour 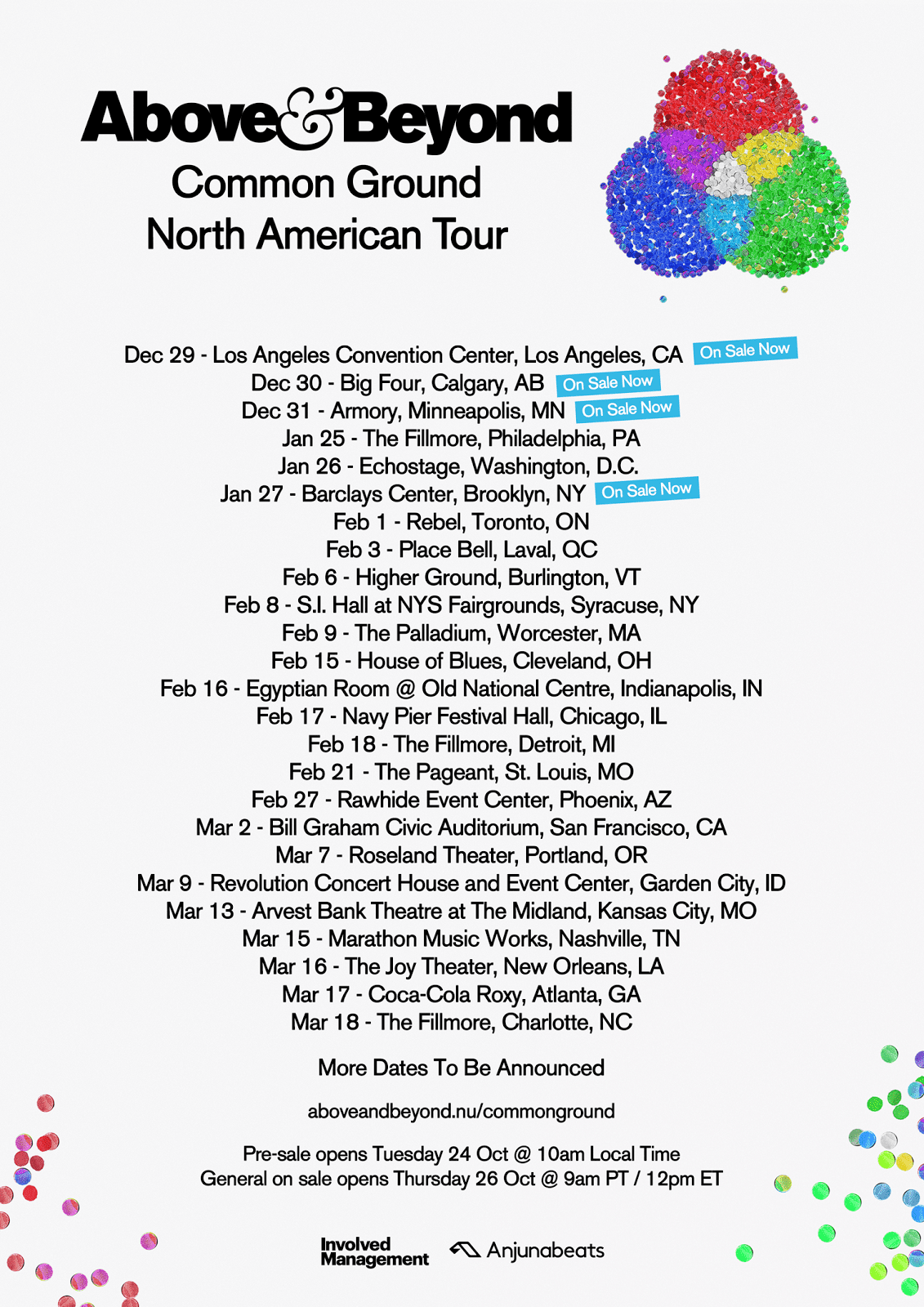 Above & Beyond announces ‘Common Ground’ tour

Following their monumental, sold out ABGT250 show at The Gorge Amphitheatre, Above & Beyond is pleased to announce that they are hitting the road for a massive tour in support of their forthcoming album, ‘Common Ground.' Starting at the end of December, tickets are available from 9am PT / 12pm ET on October 26, but eager fans can score pre-sale tickets on Tuesday October 24 by signing-up at aboveandbeyond.nu/commonground

While the Los Angeles and New York City events were revealed during ABGT250, fans across North America will be pleased to see that Above & Beyond unveiled many additional dates. The newly added shows include stops in Philadelphia, Toronto, San Francisco, Detroit, Chicago, Atlanta and more. The tour debuts on December 29 at the Los Angeles Convention Center and spans into the spring of 2018

This tour news comes on the heels of the announcement that Above & Beyond’s forthcoming album, Common Ground, will be released in January 2018. The album’s third single “Northern Soul” (out November 3) follows the release of “Tightrope” and “My Own Hymn” and marks the reunion of the group with Richard Bedford; the voice of classics ‘Alone Tonight’, ‘Thing Called Love’ and ‘Sun & Moon.’ ‘Common Ground’ is Above & Beyond’s first self-released album in the US. To celebrate, every ticket purchased online (USA only) will receive a copy of the new album.

The ‘Common Ground’ tour is poised to be Above & Beyond’s biggest yet and adds to their legend as one of dance music’s most beloved live acts. The band’s ever-expanding bucket list of headline slots includes sold-out performances at The Hollywood Bowl, Madison Square Garden, Sydney Opera House, Royal Albert Hall, Alexandra Palace, London, Amsterdam’s Ziggo Dome, The O2 Arena, Red Rocks and The Gorge Amphitheater, among others.

Above & Beyond is thrilled to hit the road: “Our 'Common Ground’ album tour will travel to over 25 cities this winter, including a few places we don’t get to visit too often. The album is almost finished – we can’t wait to share our latest creations with the North American Anjunafamily.”

Full list of ‘Common Ground’ tour dates below, and ticket information can be found here.

More dates to be announced.