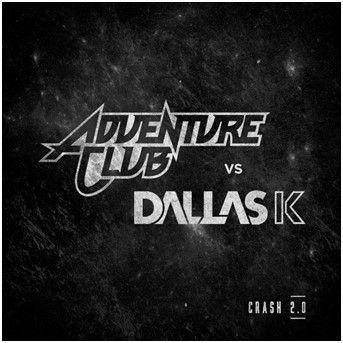 For their new single “Crash 2.0,” out now on BMG, Canadian electronic music production and DJ duo ‘ADVENTURE CLUB’ teamed with Los Angeles DJ/producer DallasK for a unique take on their song “Crash” from their debut EP Calling All Heroes. The Adventure Club vs DallasK track interweaves the original version of “Crash,” keeping its mesmerizing hook and vocal by Chloe Angelides with DallasK’s “Alienz” into an epic production.

The release of “Crash 2.0” marks the first piece of original music from ADVENTURE CLUB (Christina Srigley and Leighton James) since releasing “Fade” featuring Zak Waters October last year and the pair are heralding in the track in a big way.  Alongside its release, a special version of “Crash 2.0” is featured in Electric Daisy Carnival’s festival trailer and has been named the official anthem of EDC Las Vegas 2015.  The song also makes its radio debut on Ben Harvey’s SiriusXM Electro radio show today.  View the EDC festival trailer now at: bit.ly/1GMgC0s

Look for ADVENTURE CLUB to bring “Crash 2.0” to their North American dates which include stops at Red Rocks in Colorado, Orlando, Jacksonville and two hometown plays in Montreal. On the festival front, they will also appear in Chicago for Spring Awakening and make their first time plays at Alabama’s Hangout Festival and Squamish Music Festival in British Columbia, Canada.  In between tour dates, fans can catch Christian and Leighton at their Las Vegas residency at Drai’s—one of the premiere destinations on the Las Vegas Strip—for both their nightclub and beachclub.  Day or night, lucky weekend visitors to Drai’s will be able to experience ADVENTURE CLUB’s famed set displays on May 9, 15, 23, June 20, 27, July 4, 10, 18 and August 1. A highlight of the residency includes the duoperforming there during Memorial Day and EDC weekends.