Ain’t No Love – Cry in the Rain 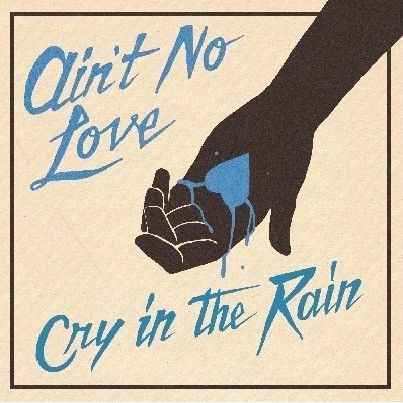 Ain’t No Love – Cry in the Rain

Ain’t No Love are made up of rappers Roland ‘1990’ Broere and Elias ‘Beanz’ McBean, alongside the hypnotic singer Saidah Conrad.

The group’s music is a blend of hip hop, electronic beats and rnb vocals. A unique mix that was formulated in the clubs and on the streets of Montreal. After years of hard work, their music grew bigger than their home city and spread throughout the world due to their notoriously high energy live show which win fans wherever they play.

‘Plummet’ EP takes all their live energy and harnesses it in a six track statement of Ain’t No Love. The EP opens with ‘Plummet’ which intro’s with a slowed down reversed Saidah vocal. Chiming synths and booming trap drums throw the track into life as Saidah’s SZA-esque vocals set the tone of the track as she sings about “all of these drugs in my stomach.” The track is a bold introduction to Ain’t No Love’s brand of self-proclaimed ‘renegade pop’.

The EP’s first single ‘Pussy Down’ flips the standard sexual expectations of hip hop on their head as Saidah commands you to “sit that pussy down” over a lurching beat which sounds like a hybrid of Bondax synths and A$AP Rocky’s pitched down vocals. The accompanying video is a brilliant subversion of typical hip hop tropes as Saidah out-sexualises the seductive female extras with her powerful lyrics.

‘Cry in the Rain’ showcases a more tender side to the group as emotive rhymes are paired with a club beat. The musical range of Ain’t No Love is shown again on the track ‘High Right Now’ which channels the chilled out hazy mood of fellow Canadian artist The Weeknd. ‘Summa’ flips the mood with an upbeat track with soft synths and smooth vocals to warm up the cold winter days. ‘Grow Up (Sip Slow)’ closes ‘Plummet’ with piano and synths dueling alongside Saidah’s vocals and the rapper’s rhymes. The closing track is a perfect ending which brings together all aspects of that Ain’t No Love talents – the music and vocals entwined across a broad musical spectrum to create an engaging and energising body of work

The group’s live performances have caught the eye of so many reputable members of the industry – resulting in them being invited to share the stage with Zeds Dead, Iggy Azalea, Steve Aoki, Redman and Calvin Harris. They’ve also played industry showcases like SXSW and been featured on MTV, Billboard and Majestic Casual. The Bridge and Law remix of their track ‘Love Me Lots’ currently has over one million views on YouTube.

Ain’t No Love have created a genre-bending EP which mixes elements from across the board and comes up with renegade pop – an original and attention grabbing brand of club ready music. Ain’t No Love’s ability to craft radio-friendly tracks with underground appeal make them a surefire group to watch for the future and the future is now.