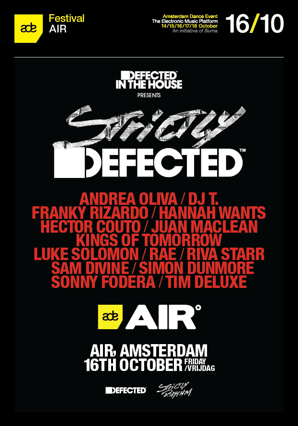 AIR Amsterdam is always at the centre of the ADE and that is sure to be the case again in 2015 when they feature for the 6th time. One of the biggest nightclubs in the city centre that blends the over and underground scenes is now ready to announce its schedule for the week in October when the whole world descends on Amsterdam, and what a schedule it is.

Back by popular demand, Pete Tong tours to Amsterdam to once again showcase his brilliance in both hosting a clubnight, curating an all-star line-up and of course his undisputed skills performing as an artist.  For the 2015 Amsterdam Dance Event show, Pete has put together a stellar line-up which is sure to guarantee a sold-out house. Appearances by Kölsch, Santé, Sidney Charles and Monkey Safari are just a couple of highlights, as well as the all-night hosting of AIR 2 by UK-based duo PBR Streetgang. Put together with AIR’s top-notch sound system and nothing short of impressive audiovisual set-ups, it’s safe to say the ADE 2015 showcase by Pete Tong is something to look forward to.

On Friday 16 October Defected In The House joins forces with Strictly Rhythm to bring the cream of underground house talent from across the globe to AIR, Amsterdam for another edition of the label’s now legendary Amsterdam Dance Event (ADE) showcase events.

The event this October marks the fifth year that Defected have thrown their ADE showcase at AIR. To date, every single one has been a roadblocked affair, and an essential date on the ADE’s expansive party calendar. The Strictly Defected party includes both established artists and rising stars from across the house spectrum, with AIR’s two rooms showcasing the depth and breadth of their roster of talent, the vast majority of whom have played their parts in ensuring the success of Defected’s shows at Amnesia and Space in Ibiza this season