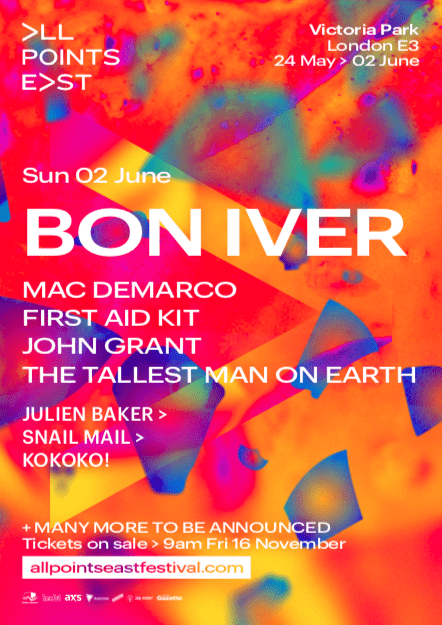 All Points East returns for a stellar second year to Tower Hamlet’s Victoria Park, following a sold-out 2018 debut that established a new and essential music event in central London.

And after announcing The Chemical Brothers as the first headliner slot for Friday May 24th 2019, the festival makes its second big announcement for next year with more to follow.

2018’s inaugural year saw headline shows from Nick Cave & The Bad Seeds, The National, LCD Soundsystem, Björk, The xx and Catfish and the Bottlemen with an astronomical supporting line up across two weekends of award winning music.

The latest headliner is the iconic Bon Iver, who will close out the second edition of All Points East on Sunday 2nd June – a performance that will be the band’s biggest ever headline show to date. Tickets will go on general sale this Friday at 9am.

Since the the cabin-in-the-woods isolation of2007’s debut LP, For Emma, Forever Ago, Bon Iver have established themselves as one of the most ambitious, creative and genre-defying bands around – with two Grammy Awards and several BRIT nominations to their name.

Each release has seen the group, spearheaded by Justin Vernon, reinvent their sound and style, most recently on 2016’s 22,A Million. The album received critical acclaim; frequently appearing on media’s ‘Best Of The Year’ lists, and proved for an equally riveting live performance – best highlighted via their epic eight-night residency at London’s Eventim Hammersmith Apollo.

Accompanying Bon Iver on the bill is Mac DeMarco, bringing his trademark ‘jizz-jazz’ and notorious stage antics to Victoria Park. Since his debut LP, Rock and Roll Night Club,the affable Canadian has seen a meteoric rise, releasing three further albums (2012’s 2, 2014’s Salad Daysand 2017’s This Old Dog). APE can’t wait to welcome his sun-scorched, laid-back breeziness that conjures up the kind of atmosphere that can only be found in the never-ending days of summer

It’s easy to forget, given everything that’s followed, that it was a self-uploaded cover version of a Fleet Foxes song that set Sweden’s First Aid Kit on their way. Quickly eclipsing that YouTube fame, however, the sisterly duo have gone on to record and release four beautifully rich and elegant records in the decade since that initial emergence. A pair of voices as pure as the Nordic air which shaped them.

Since the release of his 2010 LP Queen Of Denmark, American singer-songwriter John Grant has rapidly built up a cult following. As well as previous chart success (Grey Tickles, Black Pressure went Top Five in the UK), he’s been nominated for the Best International Male Solo Artist at the 2014 BRITS alongside Eminem and Justin Timberlake and even sung live with Kylie Minogue. Riding a wave of praise from his latest album, the infectious ‘Love Is Magic’ released last month, expect a captivating, poetic and synth-heavy set from the musician.

Swedish singer Kristian Matsson AKA The Tallest Man On Earth has been regularly compared to Bob Dylan, and it’s easy to hear why – with his passionate, husky vocals bearing a striking resemblance to the legend. But this substantial comparison has not inhibited Kristian, and his new tracks are some of his most compelling to date.

Julien Baker first gained attention through her 2015 LP, Sprained Ankle, an album praised for its tender, candid and captivating songwriting that continues to enchant people around the world. Her performance on The Late Show with Stephen Colbert demonstrated her wonderful live credentials too.

Another bright-young prospect on the bill is Matador signee Snail Mail, who Pitchfork described as “emotionally wise, musically clear, and encompasses the once and future sound of indie rock.” Her debut album Lush has cemented her as one of 2018’s breakout stars, with a near sell out UK tour highlighting the hype and excitement for the singer this side of the pond.

Congolese collective, KOKOKO! fuse their love of electronic music with African and Arabic sounds, utilising self-designed string instruments and other percussive inventions made from recycled scrap material to produce their high-energy style.

East London’s beautiful Victoria Park in Tower Hamlets also hosted a hugely popular 4-day community focused midweek event last year. Kicking off on the second Bank Holiday Monday, In The Neighbourhood is set to return across the half term week for 2019. Featuring freeaccess to the All Points East site, In The Neighbourhood will host a vibrant programme of activities and entertainment, in collaboration with the local community, businesses, organisations and suppliers. From free Outdoor Cinema, Live Music & Entertainment, Street Food to Pop Up Bars, Theatre, Arts, Sports & Wellbeing, Children's Activities and much more.