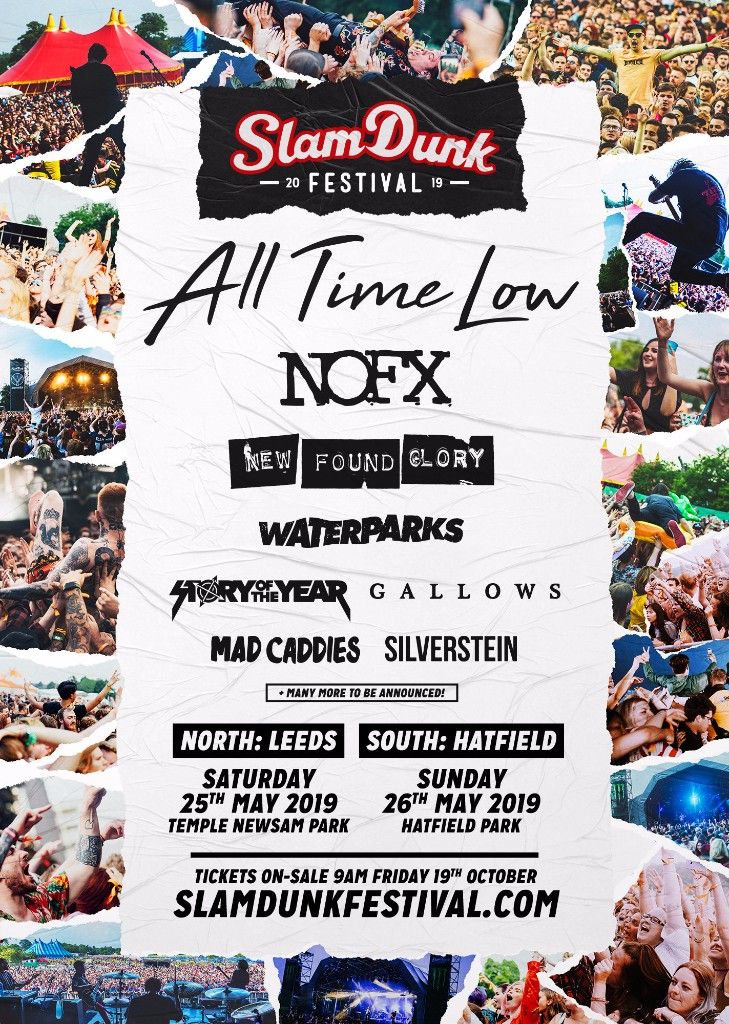 Delivering the ultimate one-day alternative festival celebration, Slam Dunk Festival is set to take a whole new stride into 2019 with its most ambitious and exciting weekend to date – lead by an incredible first wave of names and a huge move to Temple Newsam Park in Leeds.

Leading the charge as headliners in 2019, Baltimore favourites All Time Lowtruly stand apart as one of the biggest pop-punk bands on the planet. Across seven studio albums, their infectious blend of singalong anthems and beloved hooks have shone through – filling arenas and delivering again and again with a live show that has become a must-see for all. With seminal albums ‘So Wrong, It’s Right’ and ‘Nothing Personal’ defining a generation, and latest album ‘Last Young Renegade’ marking an exciting new chapter for them, All Time Low’sexclusive Slam Dunk headline shows will celebrate a game-changing band in their prime.

Frontman Alex Gaskarth of All Time Low said about their headline slot at Slam Dunk 2019:
“There’s been a bit of an ATL drought in the UK recently so we thought it best to come back and tear shit up with some rad bands. Bring your life jackets.”

Bringing over 25 years of punk history to Slam Dunk, NOFX are sure to prove why they stand as one of the most successful independent punk bands on the planet with a no-holds-barred set of adrenaline-fuelled favourites making their mark at the festival. Lead by the instantly recognisable voice of frontman Fat Mike, expect a trip down memory lane when NOFX take to the Slam Dunk stage. The “Godfathers Of Pop-Punk” themselves New Found Glory will make a hotly anticipated return to Slam Dunk in 2019, bringing the sort of arsenal of hits that’ll have thousands ecstatic from start to finish. From ‘My Friends Over You’, ‘Hit Or Miss’ and ‘Head On Collision’ to ‘Dressed To Kill’, ‘All Downhill From Here’ and ‘Kiss Me’ – their set at Slam Dunk will prove why they remain untouchable at the top. Dazzling in technicolour, Waterparks have emerged as a true phenomenon in pop-punk over the past few years, bringing their infectious and fun-filled sound to stages across the world. Their second album ‘Entertainment’ stormed its way into hearts earlier this year, and their momentous moment at Slam Dunk 2019 is primed to be a celebration of a band embracing the future.

Chad Gilbert of New Found Glory said:
“We are the Michael Jordan of Slam Dunk. And we are coming to alley oop all our jams down your faces.”

Waterparks frontman Awsten Knight said about Slam Dunk 2019:
“HELLO. WE ARE COMING BACK TO SLAM DUNK. YES. THIS IS ALL. VERY GOOD. SEE YA SOON.”

After releasing their first new music in over seven years in 2017, Story Of The Year promise to be one of the most anticipated sets of the entire festival at Slam Dunk 2019. With a full-on live show, cuts from across their career will ring out large for the returning favourites – celebrating not only the past but the future of a band beloved by thousands. Another unmissable return that’ll have festival-goers talking for months, Gallows will mark their next steps with a blistering comeback at Slam Dunk 2019. Lead by the imposing figure of Wade MacNeil, their debut album ‘Orchestra Of Wolves’ helped shape an entire generation of punk fans with its no-nonsense and anarchic take on modern rock. A live force, Slam Dunk will mark the perfect moment to see what comes next for a band ready to take on the world.

Story Of The Year’s Ryan Phillips spoke about their upcoming Slam Dunk slot, saying:
“We are crazy stoked for Slam Dunk, especially since we haven't been to the UK in ages! We're itching to get over there and jam some tracks from our latest album "Wolves", so get ready to have your face melted off and have all of your beer drunk by us dummies”.

Speaking about their return at Slam Dunk 2019, Laurent Barnard of Gallowssaid:
“We’ve tried to bury Gallows so many times, but the fucker just won’t die. I guess we’ll see you in May!”

Stuart Gili-Ross of Gallows also commented:
“Leeds & Hertfordshire. These will both feel like hometown shows for us. The time feels right for a Gallows show & we’re coming in hot”

Slam Dunk ska favourites Mad Caddies will be making another celebrated stop this year, bringing their sun-kissed sounds to Leeds and Hatfield for another immediate display of how to start the good times. Also heading to Slam Dunk 2019 is Canadian rock titans Silverstein, set to serve a true lesson in post-hardcore power with a ground-shaking tour de force that needs to be seen to be believed.

Talking about their return to Slam Dunk, Silverstein said:
“We are excited to be returning to the UK in 2019 for the next instalment of Slam Dunk!  We originally played the festival way back in 2009 and have been looking forward to doing it again. Expect a jam packed set of old & new material."

After the huge success of Slam Dunk’s move to Hatfield House last year, the festival has also announced plans for a new site for Slam Dunk North, moving to Leeds’ Temple Newsam Estate so even more pop-punk fanatics can make their way to the definitive date of the alternative diary. Reaching across two stunning greenfield sites in Leeds and Hatfield on Saturday 25th and Sunday 26th May 2019 – Slam Dunk 2019 is the next evolution for the go-to destination of rock.

TICKET INFORMATION
Tickets are on sale now and are available from slamdunkfestival.com/
Ticket Price £59. All subject to booking fees.