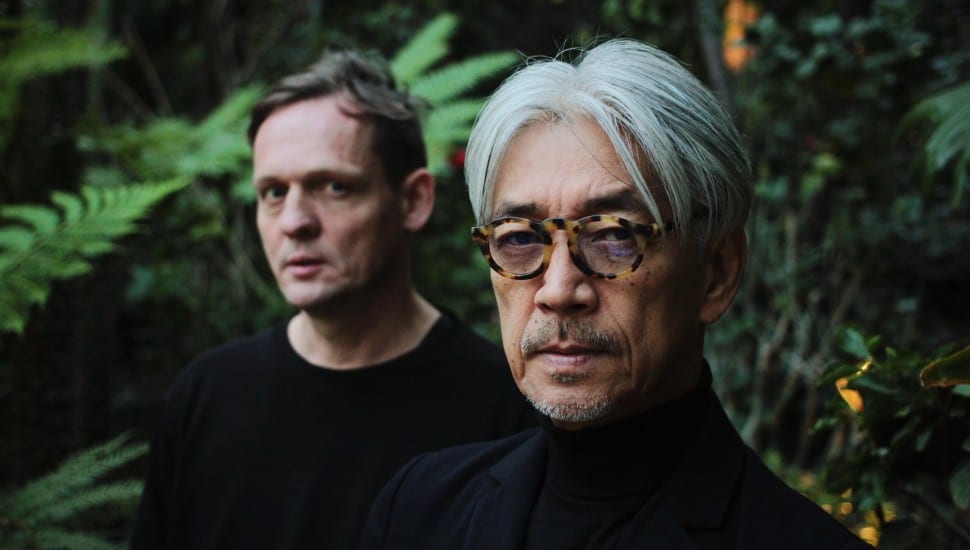 A continuation of the collaborative relationship that spawned the score to director Alejandro González Iñárritu's hit film ‘The Revenant’, Alva Noto and Sakamoto recently released the acclaimed album ‘Glass’ on the Noton imprint. The record captures a live improvisation from the duo at Philip Johnson’s iconic architectural Glass House.

“A gorgeous, spectral sound as fragile and translucent as it is spontaneous and affecting” DJ

“They create folds in our perception, moving in and out of its range naturally, much like one perceives a bird song outside the window when just a moment ago it was all quiet. This is the point where ambient music is environmental music” Tiny Mix Tapes

“As a duo, Alva and Ryuichi have attained a virtuosic union, and this particular collaboration feels like the product of a single entity. ‘Glass’ exemplifies what a beautifully mysterious form ambient improvisation can be. For just about the entire listening process, the boundary between your conscious and unconscious is diminished” XLR8R

Carsten Nicolai AKA Alva Noto is part of an artistic movement whose work explores the intersection between art, science, sound and music. He has participated in important international exhibitions like documenta x and the 49th and 50th Venice Biennales, and performed or created installations in many of the world's most prestigious spaces, including the Guggenheim, Tate Modern, San Francisco Museum of Modern Art, Sónar and Club Transmediale. He has collaborated with Ryuichi Sakamoto, Ryoji Ikeda, Mika Vainio, Scanner, Bjork, Iggy Pop and Michael Nyman, and has remixed Björk, Hauschka, John Cale, Kangding Ray, Ludovico Einaudi and Pantha Du Prince.

As composer, performer, producer and environmentalist, few artists have as diverse a résumé as that of Ryuichi Sakamoto. His work includes pioneering electronic music as a member of Yellow Magic Orchestra, classical pieces, minimal/ambient music, art collaborations and over 30 ﬁlm scores. He has been awarded an Academy Award. Recent works his 16th solo album, ‘async’.

All can be purchased or pre-ordered at http://noton.info/