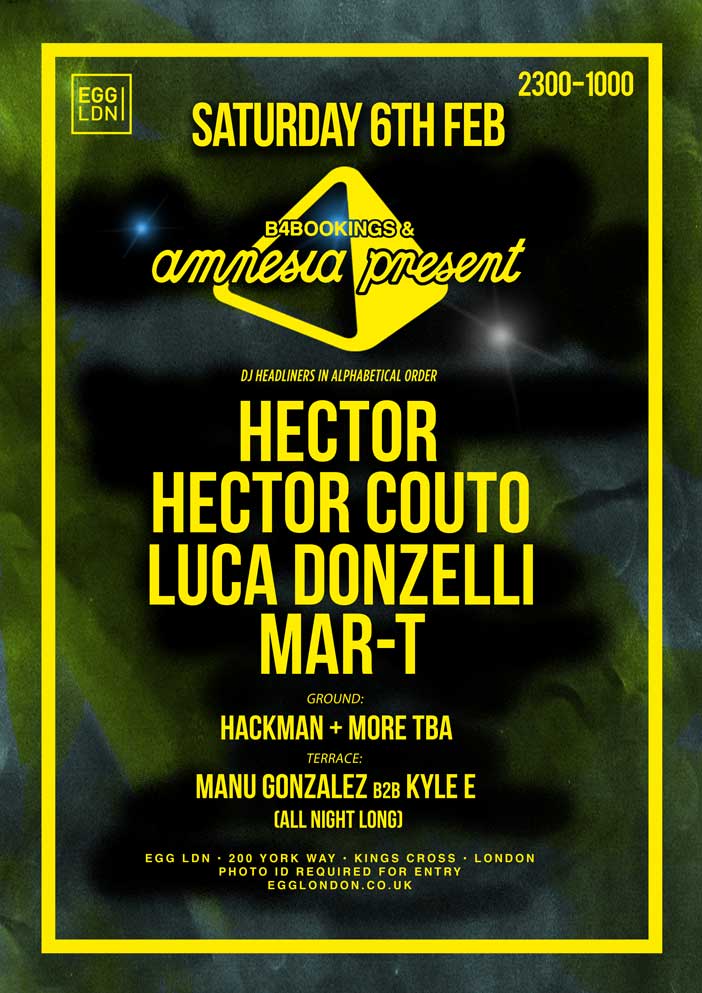 Terrace: Manu Gonzalez back to back with Kyle E – All Night Long

Returning for their third show at their adopted London home,  Egg, Ibiza’s iconic club Amnesia sprinkles its incomparable party magic on the smoke on Saturday February 6th with its fiery latin techno and house DJs and flamboyant party production ensuring a hedonistic treat for party people seeking to put the January blues behind them.

Known for its lengthy and wild parties including International summer residencies such as Cocoon, Together, La Troya, Espuma, Cream, Music On and Matinée, Amnesia’s clubbing fiesta which normally rages into Sunday afternoon, is not for the faint-hearted and for those that can last the distance it promises to be full of unforgettable moments! One of Ibiza’s original club phenomenons since 1976, whose fan base has grown on a rapid international scale, Amnesia still possesses that typical Spanish vibe full of colour energy and magic. Enhanced with Live performances and lots of animated dancers and performers to motivate the dance floor, Amnesia nights are unique and the music and crowd may have evolved but the hedonistic mentality of escapism remains very much the same. Full of
Passion!

Taking centre stage is one of electronic music’s most exciting up-and-comers, Hector, who’s know for mixing up the styles and moods, but always focused firmly on the dancefloor’s needs. His energetic sets tinged with real soul kept Amnesia at the fore last summer and he’s joined by the youthful talent, Hector Couto, who has commanded the respect of the international electronic scene in no time at all. Couto has appeared in the Resident Advisor's Top 100 Most Charted artists in 2011,2012 and 2013, and his sound continues to evolve based on an unmistakable groove powered by sleek, well-crafted tracks full of energy and irresistible basslines, that have been favoured by the likes of Hot Creations and Get Physical. With his own label, Roush and a recent partnership with Darius Syrossian that yielded the brilliant 'Who's The Douche?' EP, Couto’s star continues to rise.
2015 was a great year for Mar-T, having remixes on Get Physical and Kerri Chandler’s Madtech label and his and Luca Donzelli’s Remix of Popof's track "Going Back" on Hot Creations was heavily supported by Jamie Jones. With recent collaborations 'Crazy Culture' and 'Step by Step' by the house and techno associates, the duo further cemented their reputation with the debut 'Historia Roja' EP on Davide Squillace's This and That label and expect lots of hot new Exclusives from the pair.

With his debut release ‘Illusion’ already signed to John Digweed’s ‘Live On South Beach’ compilation after appearing on the Familia Records label, Kyle E is fast emerging as one of London’s hottest new DJ/Producer talents, getting the thumbs up from influential scene makers such as A Guy Called Gerald, Christian Smith with whom Kyle’s first podcast mix was broadcast on the Tronic Records radio show and tonight sees him go back to back with breakout Ibiza DJ and friend, Manu Gonzalez.

Following on from an explosive Ibiza summer season with appearances at Sankeys, his ‘The Face’ residency at Privilege and sets at Space and Pacha as well as wowing the Eastern Electrics Festival in the UK, Manu Gonzalez is a super hot new talent. Starting to carve out a niche for his productions with his ’Restless’ Remix for Hot Since 82, ‘La Terrazza’ and ‘Fire’ as well as stoking listeners on his weekly radio show on Ibiza Global Radio, Egg Ldn is his UK home.

Hailed for his lush Remix of Andreya Triana’s ‘Gold’, Hackman’s reputation for weaving various musical threads into a sumptuous and pleasing whole continues to rise with his debut album ‘As Above, So Below’ scheduled for release this year. Championed across the board by the likes of Nick Grimshaw, Mary Anne Hobbs and Skream, Gilles Peterson picked up his ‘Forgotten Notes’ for his ‘Brownswood Bubblers 9′ compilation, and clubbers are in for a rare treat with a diverse sound-shifting soundscape from Hackman.