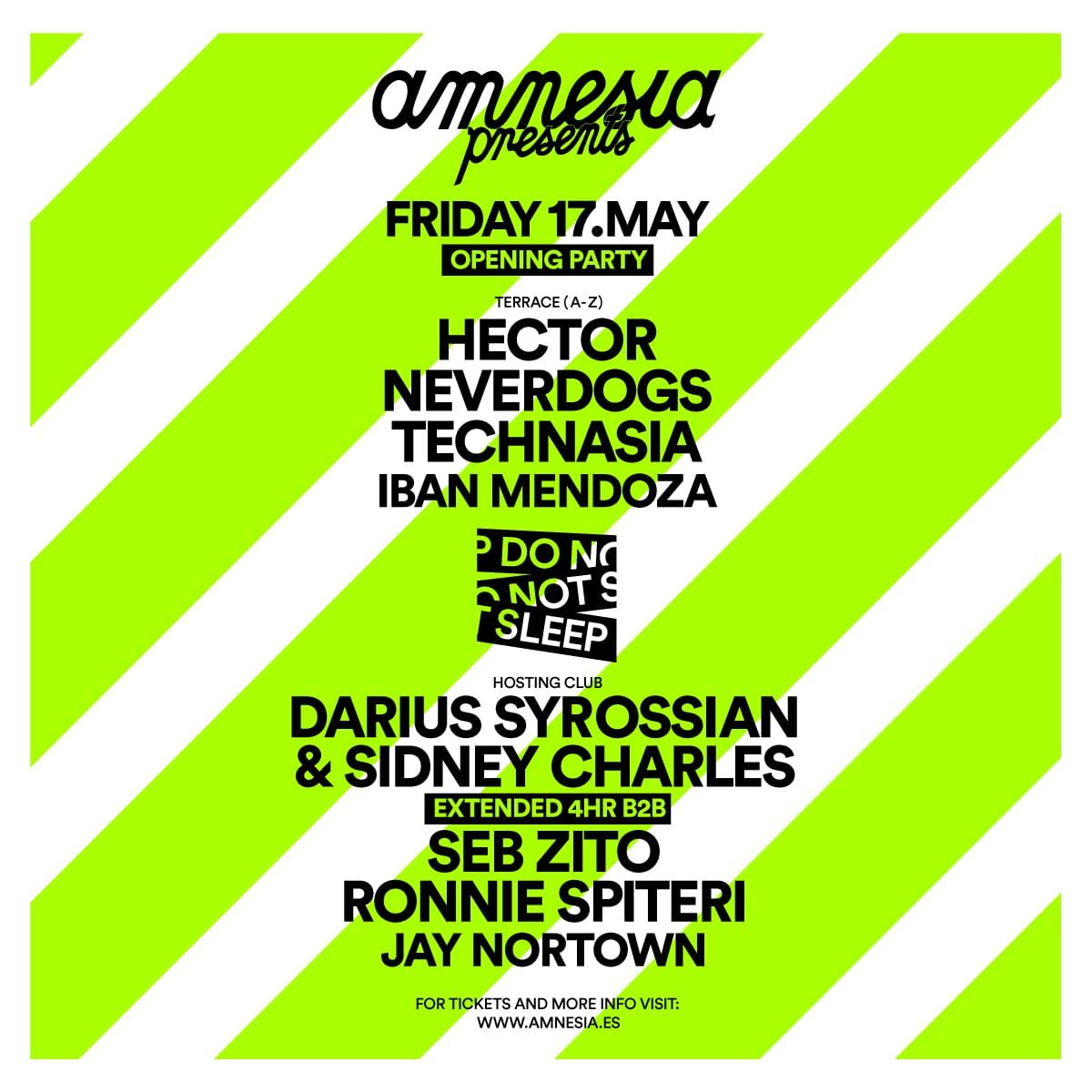 Arguably the biggest night of the week, Fridays at Amnesia will be taking on a new form in 2019 as the iconic nightclub’s international ‘Amnesia Presents’ event brand teams up with the island’s favourite straight-through-crew, Do Not Sleep, for an exclusive run of seven dates during the season.

Launching Friday May 17th with a serious statement of intent, the terrace will see Barcelona heavyweight, Hector, joined by Technasia, as well as Neverdogs and award-winning Ibiza favourite, Iban Mendoza.  Overseeing the club room, Do Not Sleep have lined up an extended four-hour B2B between Darius Syrossian and Sidney Charles, with support coming from We Are The Brave’s Ronnie Spiteri, Seb Zito and Jay Nortown.

Following a blistering year taking the Amnesia Presents parties around the world, the time has come for the team to return to base to do what they do best and show the island how the most famous terrace in the world ought to look when the festivities are in full swing. Though the rest of the line-ups are still to be announced, you can be sure that the scene’s biggest names will be situated in the infamous booth, whilst Do Not Sleep take charge of the club room with their inimitable brand of underground house and techno following their acclaimed debut season at the club last year.

The partnership comes amidst a whirlwind of change on the island, but aims to turn the focus on Friday nights at Amnesia to a solid team of residents between the two rooms, alongside a carefully selected run of headliners of the calibre that clubbers have come to expect from the world’s best-known night club. Speaking about the partnership, Do Not Sleep’s Neil Evans said:

“Last summer we found our perfect home in Amnesia’s Club Room and there was no way that we could see ourselves settling for anything less than that this year. We’ve got a great relationship with the team at Amnesia and it made total sense to partner up with them to ensure that the ‘Amnesia Presents’ events had a club room to compete with their plans for the terrace, and I think it’s safe to say people are in for a treat when they see what we’ve got planned”

Amnesia Presents & Do Not Sleep – Opening Party
Friday May 17th