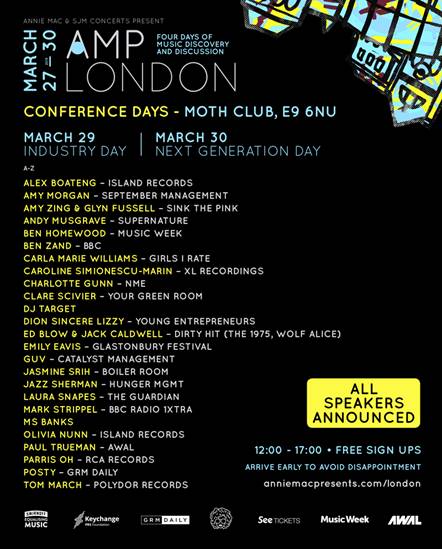 Britain’s premier music tastemaker Annie Mac announces full details of the AMP LONDON Conference Days, held from 12 noon to 6pm at Moth Club in Hackney on Friday 29th March for ‘The Industry’day and Saturday 30th March for ‘The Next Generation’ day.

Encompassing debate and discussion around the future and evolution of today’s music artists and industry, the AMP LONDON Conference Days aim to provide a welcoming hub for all those engaged and interested in music, inspire conversations about how the landscape of the business is changing, and highlight what’s going on behind the scenes that will shape the future.

Annie Mac says: “The AMP Conference Days are a really exciting development within our AMP brand. After spending the last 15 years curating music both recorded and live, to be able to curate discussions has been so fascinating. I wanted to create discussions that I really wanted to hear, involving voices that I really want to hear from. The themes are all subjects I was personally keen to explore, and we have meticulously chosen people in the industry who we think will bring a unique perspective to those discussions. I love that the conference will take place at Moth Club, which is essentially an old working man’s club, with big booths and a bar. It makes for a more informal, fun atmosphere.”

The first conference day on Friday 29th March will be dedicated to current discussions within ‘The Industry’, in partnership with Music Week, the leading weekly magazine for the UK music industry. Each conversation will be introduced by Annie, who will explain why she feels it’s important to highlight. Topics addressed by leading industry figures on the day will include:

"Where Are All The Female Bosses?" In Association with Smirnoff Equalising Music
12:00pm – 1:00pm

The second conference day on Saturday 30th March will focus on inspiring ‘The Next Generation’. All panels will be moderated and led by Annie herself. Topics addressed by leading industry and youth culture figures include:

Taking The Alternative Route, in Conversation with AWAL & Annie Mac
3:45pm – 4:45pm
Speakers to be Announced

Showcasing a broad range of the hottest upcoming and established artists and bands, across multiple genres (from Dancehall to Punk), AMP LONDON will encompass a series of underplay shows with acts playing in venues far smaller than their usual tour stops. Artists featuring on these shows include: Sam Fender, Mahalia, Theophilus London, Amyl & The Sniffers, Rina Sawayama and Puma Blue alongside Jimothy Lacoste, Koffee, Kojey Radical and Annie Mac herself. AMP LONDON also boasts the (already sold out) Printworks rave, in addition to an Oval Space take-over featuring Two Door Cinema Club and Circa Waves and a closing party at The Hackney Empire (proceeds from which will be donated to London based charity, Art Against Knives).