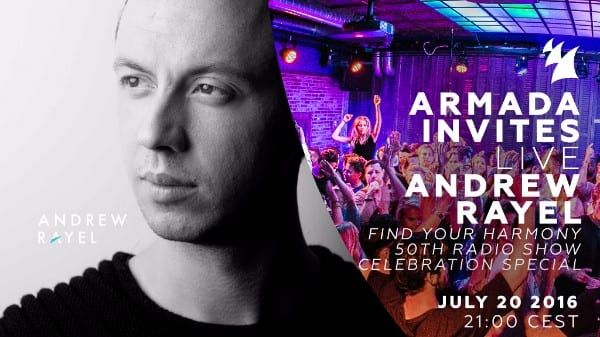 Andrew Rayel is the next globally renowned headliner of Armada Music’s unique livestream event: ‘Armada Invites’. Supported by fellow Trance stars David Gravell, Mark Sixma, and Rodg, the Moldovan DJ and producer is ready to deliver a spectacle unheard of to the crowd of ‘Armada Invites’ on Wednesday July 20th, from 9 PM to 10 PM (CET). The entire live set of Andrew Rayel will be broadcast live on Armada Music’s Facebook page and the Armada Music YouTube channel.

‘Armada Invites’ is a recurring event in Armada Music’s own in-office club in Amsterdam, comprising exclusive showcases from some of the biggest and/or most talented artists in the world. The event continually reaches a worldwide audience through its livestream on Armada Music's Facebook page and YouTube channel and has seen big artists such as Erick Morillo, Armin van Buuren, and Lost Frequencies draw in tons of viewers in previous editions.

Andrew Rayel’s live set at ‘Armada Invites’ coincides with the celebration of his 50th episode milestone for his radio show: ‘Find Your Harmony’. The name of the radio show is directly tied to Andrew Rayel debut album ‘Find Your Harmony’, which saw its release a little over two years ago. Since its inception, the radio show has gained a steady amount of followers and now celebrates its 50th episode during ‘Armada Invites: Andrew Rayel’.