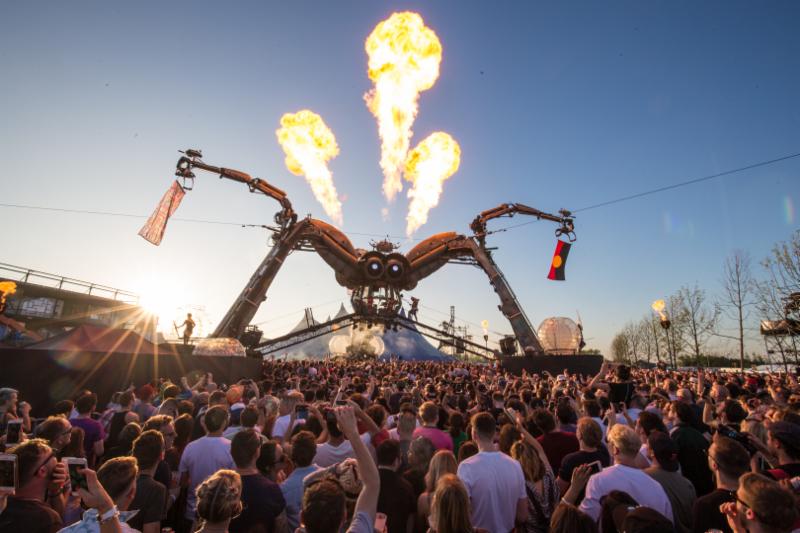 As the one and only Arcadia power up the particle accelerator for a May Day Bank Holiday weekend, bursting with immersive magic, the full lineup has been announced as artists from across the spectrum come together to create another unforgettable London moment on Saturday 4th and Sunday 5th May.

The weekend will see East London transformed into a multi sensory world of hyper evolved creatures, monumental performances, all engulfing spectacles, breathtaking new show chapters, top secret collaborations and high octane innovations as the Spider lands at its only UK show of 2019.

Spearheading Helix is dancefloor alchemist Jamie Jones with an exclusive set designed specifically for the Spider with a ground breaking new finale in developed in collaboration with Arcadia.

Joining them to write Helix's genetic code are techno powerhouse Alan Fitzpatrick, the pulsing warehouse spirit of Dave Clarke, Dense & Pika's debut Arcadia appearance, and rising Swedish star La Fleur who reunites with Hot Since 82 after a triumphant 2018 Ibiza season while Melé cartwheels out the Latin grooves and tropical energy.

Sunday sees Radium, Arcadia's full spectrum bass showcase erupt in an explosion of roots, colour and urban soul as the legendary UKF take the helm to celebrate their tenth anniversary.

Joining EZ to pump molten steel through the Spider's circuits are the innovation engine that is Sub Focus who will be joined by ID, the thrilling talents of Dimension, Flava D's cutting edge bassline mayhem, Lady Leshurr's rampaging lyrical freestyle and very special guest Lethal Bizzle tearing up the Arcadia landscape with an uproarious journey through hip hop and grime.

Stoking the flames at the UK's signature bass event are game changers Ed Rush and Optical, original junglists Fabio and Grooverider,  Bristol don Notion teaming up with Bushboy in a UKF exclusive, total meltdown from
The Prototypes, and heaving party bangers from Toddla T and Chimpo.

And the day's only getting started. After a ride Around the World in 80 Tunes, man of the moment

Benny L steps up alongside Circuits – the collaboration between Kasra and Inside Info, reggae junglist Ed Solo, Jus Now and Eva Lazarus rolling out the carnival vibes, LUCY, Mollie Collins, Particle, a slip back in time with Slipmatt and last but most definitely not least – the Blast DJ's…,.  With MC's 2Shy, Jakes and Texas keeping the flow rolling – the lineup is IN.

The Arcadia London festival supports Arcadia Reach – a non profit organisation whose projects include the development of well drilling technology to improve water access in a remote part of Sierra Leone, collaborating with the local community to create a cycle of sustainable agriculture. Taking inspiration from those collaborations, Arcadia will be inviting artists and musicians from those communities to join the London show, so stay tuned.
Stand by for ignition…. This is Arcadia London

Tickets for Arcadia London start at just £47.50 + BF per day or £85 + BF for the full weekend. All tickets available from: www.arcadialondon.co.uk