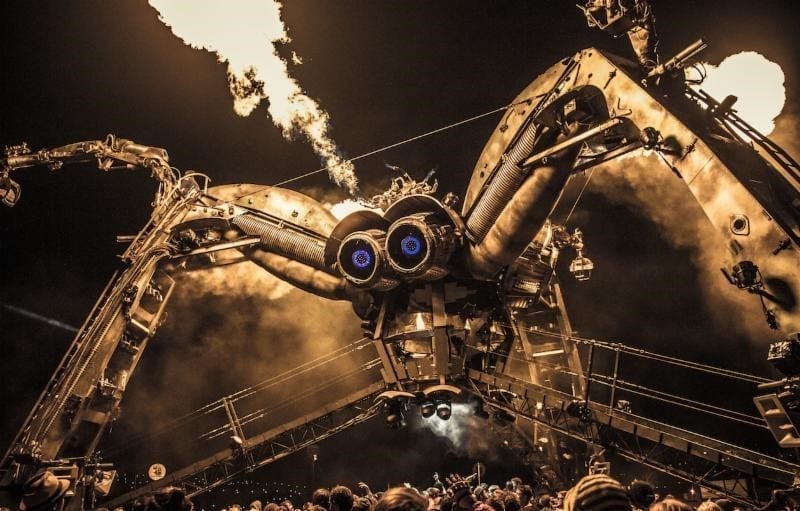 Arcadia Spectacular and their world-famous mechanical spider, built in Bristol from 50 tonnes of recycled military hardware, are set to land in Bristol’s central Queen’s Square on the 4th & 5th September. This will be Arcadia’s first ever city-centre event, fusing innovative music, circus, sculpture, special effects and huge scale, recycled biofuel pyrotechnics to deliver a truly epic weekend on home-turf.

Fatboy Slim, Chase & Status and Skrillex are amongst the artists to have played in the giant spider, with Disclosure and Seth Troxler DJ’ing to an estimated 60,000 strong audience at last years Glastonbury Festival. Recently returning from a staggering show out at Miami’s Ultra Festival, Bristol will be witnessing the hugely immersive ‘Metamorphosis’, show, a brand new performance which will debut at the Glastonbury Festival in June this year. Combining cutting edge technology, top level pyrotechnics, acrobatics and the leading lights of the electronic music scene, the show will be of truly monumental proportions.

“We’re hugely excited to bring Arcadia home to Bristol for our first inner city UK show. Bristol and it’s community have been so influential in our evolution, and it’s a real honour to play such a key role in the city’s life during such an important year. We hope it will be a memorable moment of unity that celebrates the inspirational possibilities of what can be done with the world’s waste.”

Arcadia ‘Metamorphosis’, is being brought to Bristol as part of the city’s year as European Green Capital. It will see the conversion of Arcadia’s signature flames to biofuel – creating the world’s first recycled biofuel pyrotechnics system. It’s one of six projects funded by Arts Council England’s Exceptional Award, as part of Bristol’s year as European Green Capital. The event will be produced by Team Love in partnership with Brisfest.

The line-up of artists will be announced in June with tickets on-sale now from  arcadiabristol.com , starting at £25.

Further details will also be posted on the Bristol 2015 website –  bristol2015.co.uk