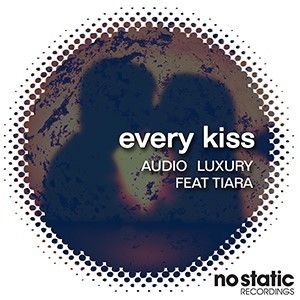 No Static spice things up again with another hot hot single, this time coming from Russia’s talent Audio Luxury and vocalist Tiara and backed up by 3 on points remixes coming from Blue Azure, Olej and Quely.

After the well-received James Rhod’s single and the outstanding Irregular Disco Workers’ remix, Nu Disco imprint No Static freshens up things and drops another gem coming from Russian Audio Luxury and the lovely voice of Tiara. The pair has been working together for quite a while, and they have created their own sound, mixing grooves and melodies of Deep House with the loved up atmospheres and the catchy bass-lines of Nu Disco. We couldn’t let their ‘Every Kiss’ go and, after been included in the latest Nang’s Array compilation, here for you our new release. Alongside the super catchy radio friendly original version we also put together a great ensemble of remixers: Blue Azure, Olej and Quely.

Things kick off with the original version: a slow Nu Disco groove is carefully merged with a warm deep bass line and with dreamy synth melodies while Tiara’s vocals drive the cut into loved up atmosphere.. Blue Azure’s version is next: 808 electro patterns are mixed with moody synth melodies, shifting things into a more old school 80’s sounding jam, still groovy, still strong on the dance floor. The third cut in the package is Olej’s re-work: permeated by a summery vibe, the track starts with funky guitar riffs which slowly grow followed by its relentless drums’ loops and Olej’s magically uplifting job on the melodies which kicks in in a long but effective break. Quely’s version is a romantic interpretation of the original track, sampling the vocals and fusing them with wobbly bass line and a sweet crescendo of pads and chords.