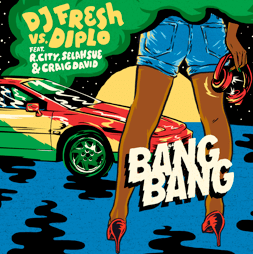 After selling over 3 million singles and bagging 7 top 10 records in just 5 years, UK bass music legend DJ Fresh is dropping his new single ‘Bang Bang’ to round off 2016 with a… well, bang! Due out on 9th December via Ministry of Sound, ‘Bang Bang’ recruits an all-star cast with a production collaboration from Grammy Award Winning Producer and DJ, Diplo, plus features from U.S. duo R. City, Belgian singer/songwriter Selah Sue and UK icon Craig David, who is currently enjoying a phenomenally successful return.

The highly infectious new single overflows with raw vocals from R. City, menacing bass, and heart-racing sirens, pulling you into the melody with its distinctive hook. The single offers effortless vocal performances from Selah and Craig which perfectly match Fresh & Diplo’s production abilities making this track a sure fire hit!

Reigning as one of the UK’s most prolific multi-platinum producers, DJ Fresh has worked with artists including Rita Ora, Ellie Goulding and Dizzee Rascal and is showing no sign of slowing down with his chart-topping collaborations anytime soon. With two #1 singles under his belt and a plan to swap tour life to focus more on the studio, 2017 heralds a new production era and an all guns blazing approach as DJ Fresh also launches his new writing and production team ‘Fallen Angels’.