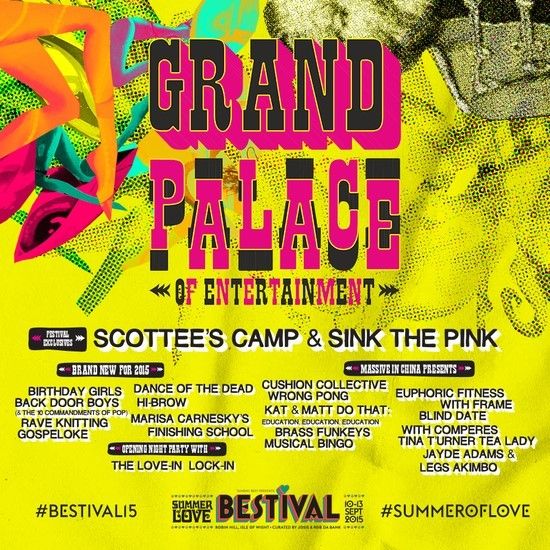 Defining breath-taking flamboyance on an epic scale, we’re tickled pink to announce that our audaciously tongue-in-cheek adventure-land, The Grand Palace of Entertainment, will be gracing Bestival’s Summer of Love with more than just a splash of bawdy bacchanalia. A hive of fun and brilliance, if you seek the astonishing or unexpected this September 10-13 at Robin Hill Country Park, then look no further than the Grand Palace.

Summer lover Rob da Bank says: “Where else can you find Rave Knitting sitting alongside the outrageous camp overload of Sink the Pink and Scottee? I’m not sure, but what I do know is The Grand Palace is one of the funnest and funniest places you’ll find at Bestival – non-stop cabaret, outrageous camp, and one of the most flamboyant arenas at any festival. Don’t be shy – dive in!”

In a festival exclusive, we’re overcome with joy that Sink the Pink are back for their seventh year at Bestival. A party force keeping our minds blown and our lives fabulous until dawn, you can expect huge stage shows, interactive performance madness and the best party DJs. Also returning exclusively for us is Bestival favourite Scottee, who has rounded up his gang of the truly unusual, to present another startlingly limp-wristed edition of his infamous variety knees up – CAMP!

Keeping things swoonsomely amazing, we have lots of brand new turns joining the palatial party, too. So brace yourselves for sketch comedy trio Birthday Girls, boyband disco action and debauched dancing with Back Door Boys (& the 10 Commandments of Pop), the unholy alliance of acid house and wool that is Rave Knitting, and church-fuelled sing-along mayhem from Gospeloke. Plus we’ll have Dance of the Dead, Hi-Brow and the all-action Marisa Carnesky’s Finishing School, all making their Grand Palace of Entertainment debuts.

The libertine liveliness doesn’t stop there though, as Bestival brazenness runs all day with Massive in China who will host all manner of daylight revelry from the likes of The Roundhouse’s resident performance art troupe, Cushion Collective, who will be exploring love in its many guises, crazy table tennis types Wrong Pong, interactive comedy duo Kat & Matt Do That: Education, Education, Education, New Orleans style hip-hop brass band the Brass Funkeys, and melody-based ball manipulators Musical Bingo. Plus there will be Euphoric Fitness with Frame, Blind Date, and Massive in China’s comperes Tina T’urner Tea Lady, Jayde Adams and Legs Akimbo .

And, kicking it all off in the exquisite style that we’ve come to expect from our off-the-wall cabaret kingdom, don’t miss an avalanche of emotion, power ballads and throbbing beats at our opening night party The Love-In Lock-In. Welcoming in the weekend with a saucy, sexy smile, make sure you start your Bestival endeavours with love.