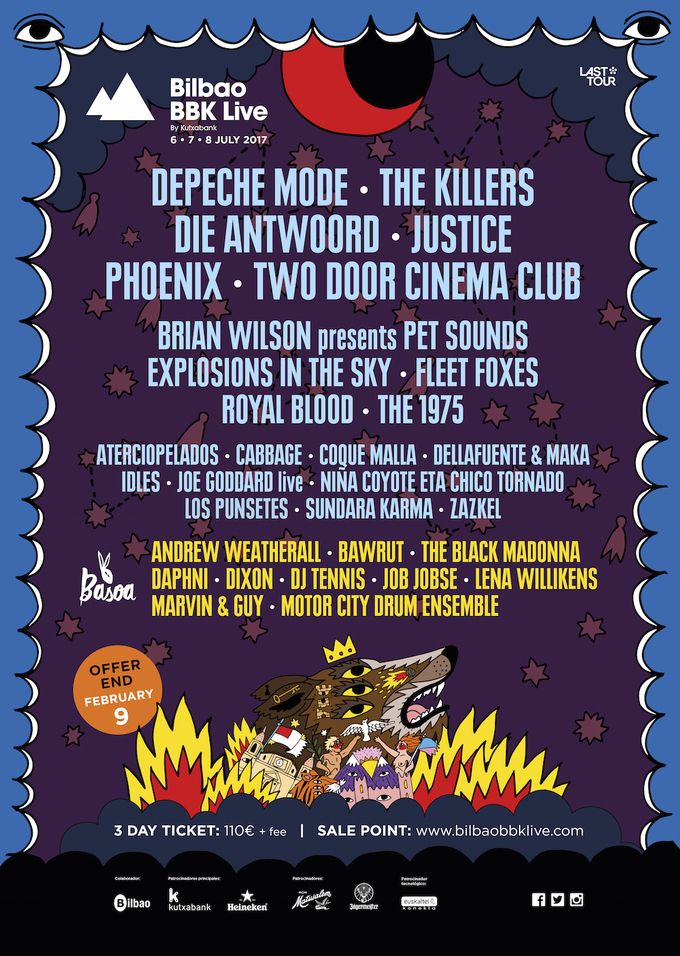 Bilbao BBK Live is excited to expand on its lineup for 2017 with Royal Blood, Brian Wilson presents Pet Sounds, Explosions in The Sky, Joe Goddard live and more. They join an already jam-packed lineup including Depeche Mode, The Killers, Phoenix, Two Door Cinema Club, The 1975, Justice and many other great acts to play atop the Kobetamendi Hill in the the heart of the Basque Country.

Thunderous Brighton rock duo Royal Blood are renowned for their hard hitting and riff heavy live shows, so much so that rock titans like Foo Fighters have taken them on the road. With a new album surely on the horizon the band are long overdue a live return and their set at this year's festival will likely be one of the loudest and most vital in the festival's history.

A true master of his craft; as the primary songwriter for 60s legends The Beach Boys, Brian Wilson is responsible for some of the most memorable pop songs of all time not least on the band's seminal album Pet Sounds. This summer Bilbao BBK Live is honoured to have him present the legendary album in full.

Explosions In The Sky's epic post-rock has seen them soundtrack emotional on screen roller coasters like Friday Night Lights and last year's blockbuster movie Deepwater Horizon. Their set is sure to be one of the most atmospheric of the festival and where better to see it than on the picturesque Kobetamendi Hill. Hailing from Bristol, post-punk quintet IDLES have gained a reputation for their noisy punk sounds and their sweaty, incendiary live shows. With a driving rhythmic basis and lyrics that are both poetic and funny, they are one of the bands to watch out for in 2017 and with debut album ‘Brutalism’ on the way we’re certain their riotous live show will be one to remember on their first visit to Bilbao BBK Live.

Whether on his own or as one half of acclaimed DJ duo The 2 Bears, Joe Goddard has graced the booth of practically every sought-after club night in the UK. Best known as a member of Hot Chip, he’s responsible for some of the most instantly recognizable synth pop of all time and is sure to offer one of the standout sets of the weekend.

With acts including Depeche Mode, The Killers, Phoenix, Two Door Cinema Club, Die Antwoord, Fleet Foxes, Justice, The 1975, Andrew Weatherall, The Black Madonna, Daphni, Dixon and DJ Tennis already confirmed and many more still to be announced, Bilbao BBK Live 2017 is shaping up to be the biggest edition to date. Book now at bilbaobbklive.com.