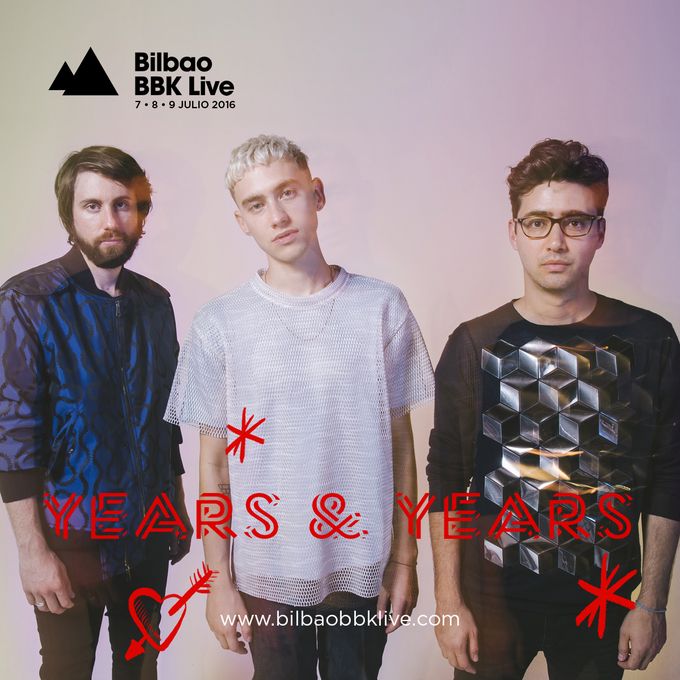 Returning to the picturesque Basque Country for the 11th year running, Bilbao BBK Live will welcome 40,000 revellers to the area for a weekend of amazing music. Held from the 7 – 9 July, the festival brings an unparalleled lineup together with the jaw-dropping backdrop of green mountains and stunning views of the city.

Kicking off the year winning the coveted BBC Sound Of Award, 2015 was certainly a landmark 12 months for Years & Years. Their highly-anticipated debut album ‘Communion’ went straight in at number one on the UK Album Charts and has shifted over 650,000 copies worldwide thanks to chart smashing hits like ‘King’ and ‘Shine’. Their anthemic and dance-worthy electropop is not to be missed this year at Bilbao BBK Live.

Grammy nominated, critically acclaimed indie rockers Wolf Alice roared into the public eye last year with their debut album ‘My Love Is Cool’. Playing huge festival slots and headline tours culminating in a sold out show at London’s prestigious Brixton Academy, the four piece have gathered legions of loyal and devoted fans worldwide. Led by striking frontperson Ellie Rowsell, the band are without question one of the UK’s most vital talents and are sure to provide one of the standout sets of the festival.

Hailing from Madrid, alternative quartet Hola A Todo El Mundo create a musically diverse mix of folk and pop to striking effect. Having evolved throughout their career and with a new album on the way this year, the band’s brilliantly vibrant, multi-instrumental live show will provide a perfect festival moment.

With a plethora of artists still to be announced, 2016 is sure to be a standout year for Bilbao BBK Live, bringing huge names together with a host of new and acclaimed talent to the beautiful Kobetamendi Hill. Tickets, priced at £69.00 + bf are available now at www.bilbaobbklive.com.