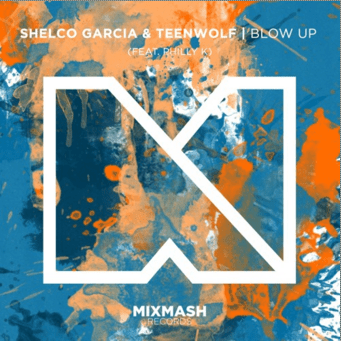 ‘Blow Up’ starts with a mellow synth melody and the stripped-back vocals of Philly K, before crescending drums give way to a bouncing bassline and a pitched-up vocal sample. A summery sing-a-long smash, ‘Blow Up’ has subtle hints of the duo’s roots in moombahton that will soon get the crowd moving.

Shelco Garcia & Teenwolf were both independent musicians before joining forces on the track ‘Fat Man Bass’. Laidback Luke played it out in Amsterdam, and soon after signed the duo to his label, Mixmash. The rest is history; since they first got together, Shelco Garcia & Teenwolf have produced a track with Diplo for Madonna’s latest album, have since been supported by the likes of Kid Sister, Will.I.Am and Miley Cyrus, and they played the renowned Electric Daisy Carnival last year. This year, the duo will be playing at the Mixmash Miami Pool Party during the Winter Music Conference.

Mixmash Records have gone over leaps and bounds since its birth in 2004. The brainchild of Laidback Luke has produced a stream of solid tracks for upcoming DJ’s and producers from all over the world. Last year, Mixmash launched its first Label Night during the Amsterdam Dance Event. This debuting success was followed by the Mixmash Pool Party during the Miami Music Week with some of EDM’s finest. The future of Mixmash is a bright one.