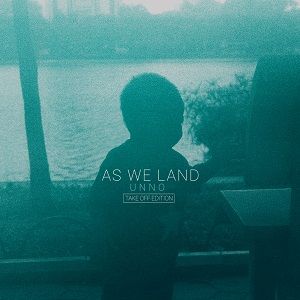 In anticipation of their forthcoming album, French trio UNNO present the expanded ‘Take Off Edition’ of their ‘As We Land’ EP via Nowadays Records on 8th April.

The group’s name, UNNO – which stands for ‘the UNexpected NOte’ – exemplifies the group’s individual approach to creating music. The eclectic 6-track release, which includes new track ‘Salt’ alongside a fresh remix of opener ‘Blue Leaf’ from fellow Nowadays signees BRNFKD,  showcases the group’s distinctive style; constantly prompting the listener to expect the unexpected with dreamlike synths, droning bass and erratic percussion. With hugely varied influences, the trio display an insolent freedom in the way they create their music, with each track containing its own narrative: they forbid nothing and allow everything.

Opening with a punchy percussive combination of claps and snares, first track ‘Blue Leaf’ ebbs and flows with a unique ambiance made yet more poignant with the building intensity and layering of harmonised vocals. As UNNO explain, “this track is our most direct…it is about love relationships, life together. How you let go of what your life used to be so you make room for something else.” The jittering 8-bit inspired opening of ‘The Miles’ slowly gives way to swimming synths and poetic rap vocals, whilst ‘Walls’ features layered vocals and clicking acoustic percussion reminiscent of Wood Kid, and is about coming to terms with the breakup of a suffocating and oppressive relationship. The track is accompanied by visuals from French director Julien Capelle, who demonstrates his masterful use of colour and abstract shapes to create a stunning accompaniment to the music. The synthesized chords of ‘We Lay High’ continue the 8-bit vibe, providing an almost orchestral feel to the track, with production that is reminiscent of Kavinsky meets James Blake. New addition ‘Salt’ brings the pace back down with a sorrowful echoing vocal, volatile snare-led pattering percussion and distorted synths which build to a deafening crescendo, leading to the round-off remix of ‘Blue Leaf’ from French producer duo BRNFKD, who provide a deeper, darker and more ominous take on the track.

Since forming in 2011, UNNO – comprised of Awir Leon, J.Kid and Tismé, who are all members of the prolific Dunkirk-based JAYFLY collective – have been making a name for themselves in the French music scene. Following their first ever live performance on the French TV show Taratata, the group have since been delivering unforgettable performances bursting with an energy that is both dreamy and explosive, which led to them being named ‘The Discovery of Printemps de Bourges’.

Now, ahead of their forthcoming album release, UNNO’s ‘As We Land (Take Off Edition)’ EP will provide another chance to sample the sonic delights of their breathtaking sound  –  one that is both raw and sensitive; energetic and melancholic.