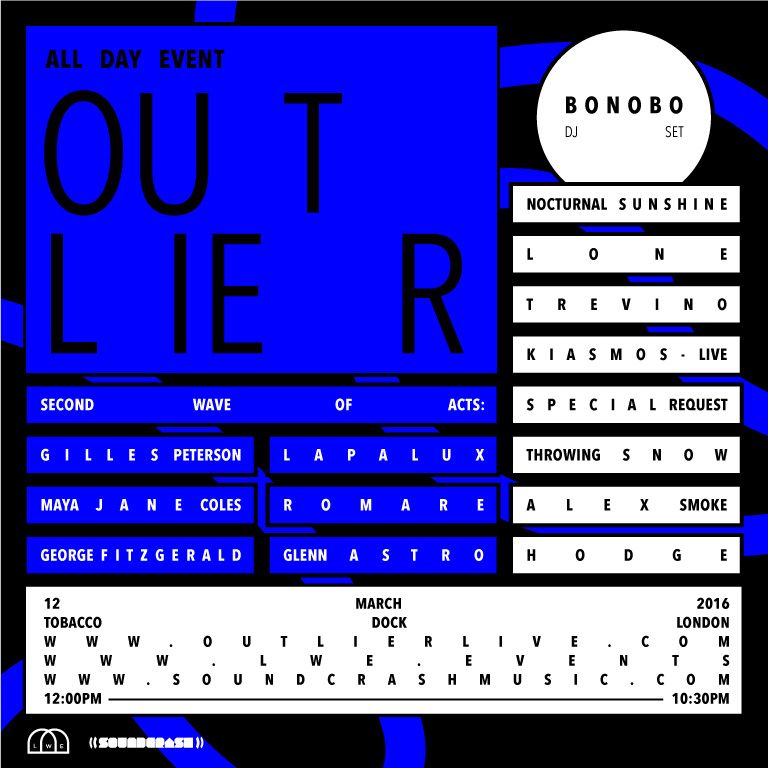 New international event series – Outlier – curated and headlined by Bonobo, announce the second wave of acts for their colossal, all-day launch party taking place at Tobacco Dock on Saturday 12th March, with a genre-defying programme of music from some of the industries most innovative talents.

Joining the already stellar lineup is a man who needs little introduction; broadcaster, DJ, producer and head-honcho of Worldwide and Bronswood Recordings, Gilles Peterson is acclaimed as one of the leading tastemakers in modern-day music. Offering a double-helping of auditory goodness, Maya Jane Coles will play as both herself and her darker alias, Nocturnal Sunshine, demonstrating her dexterity and formidable command of the dancefloor, whilst enigmatic producer Romare will bring his disco-tinged sounds to the East London venue.

After a game-changing year in 2015, George FitzGerald will also join ranks with experimental producer Lapalux adding to the event's live music offering. Hotly tipped for 2016, the fresh talent of Glenn Astro will be showcased with a further wave of acts still to be announced for the land-mark launch party.

ABOUT OUTLIER
Outlier is a new international event series curated by Simon Green aka Bonobo, launching Saturday 12th March 2016 at London's Tobacco Dock. Live acts and DJs carefully handpicked by Bonobo will play at the all-day party across multiple rooms, as well as an extended DJ set from Bonobo himself.

A man at the top of his game, Bonobo has released four studio albums since joining Ninja Tune, with his last 'The North Borders' receiving critical acclaim across the board and charting inside the UK Top 30. The following tour saw a string of sold-out shows, wowing a combined audience in excess of 2 million fans and culminating in a colossal road-block showcase at London's iconic Alexandra Palace.

With another album in the workings, Outlier is an opportunity for Bonobo to harness his talents as a curator and arbiter of club culture, demonstrating his instinctive relationship with music and show he is equally adept as a DJ.