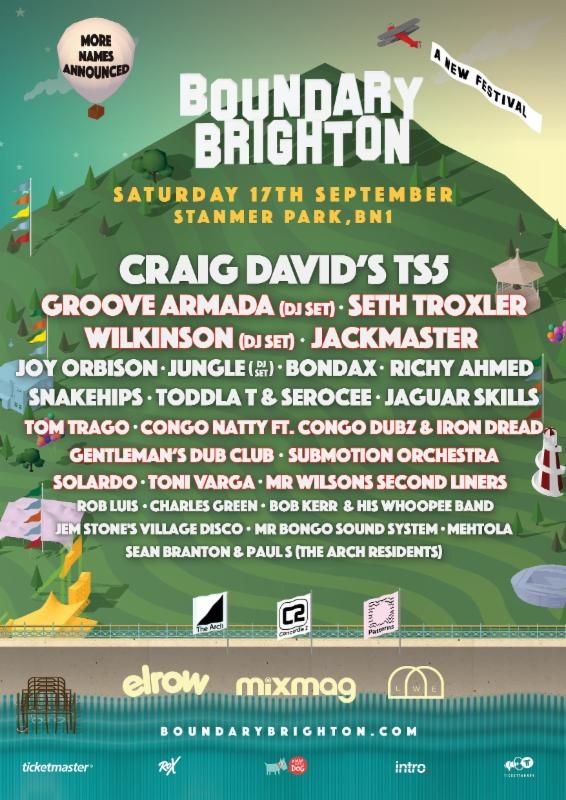 Craig David has taken 2016 by storm and will headline the festival with TS5; expect a forward-thinking trip to nostalgia; with a heavy emphasis on party. Expect an eclectic mix of bangers from old school anthems and future classics. Commenting on the show, Craig David said "I can't wait to bring 'TS5' to Boundary Brighton! Trust me it's going to go off big time!"

Groove Armada will bring one of their famous DJ sets to the first event. Constantly moving and evolving you can expect a set that goes through the very best In house music.

Jackmaster has a mercurial ear for making people dance, breaking down the barriers between fun, underground and commercial, he'll always leave you with a smile on your face.

When Richy Ahmed is on a lineup, you know the party is going to have some heavy heat. Having earnt his stripes curating some of the DC-10 lineups in Ibiza, he's become a trusted ear within house and techno.

One of the most naturally gifted DJs on the planet, Jaguar Skills is insane to watch when he's in full flow. Tweaking every single knob on the mixer, his technical wizardry puts others to shame. From rock to rave, hip-hop to rap; he'll be mixing it all up with ninja skills.

Boundary is all about doing things a little differently, so we've called on the eccentricity of Bob Kerr and his Whoopee Band, a mad cap jazz outfit formed in 1967. They're as brilliant as they are utterly insane. They are joined by Mr Wilson's Second Liners – A New Orleans band are bubbling over with serotonin infused 90's rave classics. An anarchic extravaganza, bursting with colour and sound, rallying impromptu raves at every turn.

Toni Varga has built a career on connecting with the audience, which has made him a staple on the Elrow lineups globally. He'll be bringing his experiential electronic rhythms to the Elrow stage.

With further surprises yet to come, presale and first release have completely sold out with second release tickets running low.

Become an ambassador: Earn a free ticket by selling 6 to your mates.
Find out more: http://bit.ly/BB_Ambassador