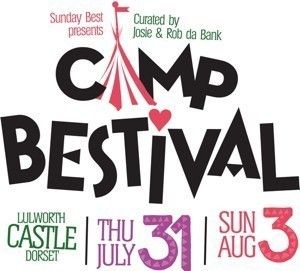 Following the announcement of The Feast Collective, things are really cooking at Camp Bestival HQ! With James, De La Soul and Basement Jaxx topping the bill this coming July 31st – August 3rd, we will also have out of this world performances from Mr Tumble, Horrible Histories, Ben and Holly – Live, Johnny Marr, Sinead O’Connor, Laura Mvula, Boy George & Marc Vedo and Totally Enormous Extinct Dinosaurs. Plus there will be fantastic theatre, shows, attractions, activities, poets, authors, talks and lots more to keep you entertained all weekend long. Looking at all of that, you’d be forgiven for thinking the line-up was complete but we‘ve got a whole new wave of comedians, bands and DJs to tell you about, all of whom will be running away to join our Circus at Lulworth Castle!

Rob da Bank says: “The Camp Bestival comedy department have been slaving over a hot keyboard bringing in some of the funniest names on the scene at mo. I can’t wait to see the Pajama Men – you have to check that show! We’re also teasing out some more great musical names – from Pop Will Eat Itself to D:Ream and DJ Yoda, we cant be accused of not mixing it up in our usual style. Something for everyone is our unspoken motto, so I hope you like what you’re seeing so far and there’s more to come!”

Everyone loves a laugh, so we are particularly please that top comedian Milton Jones will be leading a side-splitting line-up of clowns at this year’s Camp Bestival. Renowned for his deadpan delivery and surrealistic flights of fancy, all encapsulated in the most sublime one liners, Milton is a regular star of Mock the Week, as well as a stalwart of BBC Radio 4s comedy output and he has a natty line in very loud shirts too, so don’t miss him. There will also be funny business throughout the weekend with comedy sets from The Pajama Men, Nat Luurtsema, Ben Norris, Markus Birdman, Colin Hoult, Matt Reed, Jim Smallman, George Egg, Sarah Bennetto and the amazing Comedy Club 4 Kids!

There’s still plenty more circus charms and enchantments coming your way, so keep your eyes peeled for all the latest news.

Age 5 -10 Weekend Ticket (inc. camping) – £20 These ticket holders must be accompanied by a Ticket holding parent or guardian over the age of 21*

All Tickets:
– will incur a booking fee.
– are non-transferable and cannot be re-sold.