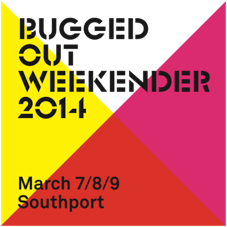 In 2014 one of the UK’s most enduring, influential club nights, Bugged Out, will celebrate their 20-year anniversary – an enormous accomplishment and an epic journey marked with some truly memorable moments.  Across the year Bugged Out will be celebrating this significant milestone, starting with what has become their flagship event: the Bugged Out Weekender – and where better to kick off the birthday festivities than the place where it all began, in the north of England.  After two hugely successful events in 2012 and 2013, the 2014 Bugged Out Weekender will take place on the new dates of March 7, 8, 9th at new location; the Pontins resort in Southport, near Liverpool.  The multi-roomed event features world renowned DJs and live acts, accommodation on site and will include pool parties and day-time activities.

Today, we are pleased to announce the second wave of DJs that will be playing the 2014 anniversary event.  Andrew Weatherall is something of Bugged Out stalwart who first played way back in 1995 and has been a regular and huge supporter of the club ever since.  Regulars Skream and Dan Avery (whose anticipated debut album is just out on Erol Alkan’s Phantasy label) both made their first appearances in 2007, whilst Radio 1 DJ Heidi first brought her jacking house and techno vibes the year before in 2006.  BO are excited to have relative newcomer Jackmaster back (he first played BO in 2011), elsewhere added to the line up are Dirty Bird’s Justin Martin who heads over from San Francisco, whilst deep house godfather Kerri Chandler flies in from New Jersey.