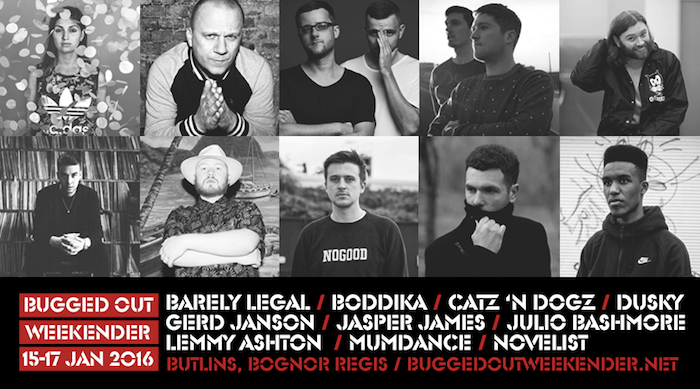 With the summer over half way done, panic is setting in amongst the British public that Winter will fast be upon us once again like an old class mate that won’t leave you alone on Facebook. But don’t stress, help is at hand in the form of that old naughty friend who won’t let you repent your Christmas sins… the Bugged Out Weekender 2016 – where January is king and you don’t need the sun to have a splash around in between thrill-inducing water park facilities and pool side sounds… No. All you need to do is book your one-way ticket to happiness for that otherwise smiley face-sparing weekend in January. Big Green Coach Company can make sure you get there safely and ethically and will probably also carry your depleted but happy soul back to reality, when it will almost be February and therefore almost Spring. SIMPLE SOLUTION TO YOUR PROBLEMS REALLY.

Having already revealed the first wave of acts for the next edition – a healthily hedonistic bunch of regulars that can’t stay away such as Erol Alkan and Heidi plus new conspirators from both sides of the Atlantic including Chicago’s The Black Madonna and acid enthusiasts Paranoid London, BUGGEDOut! can now reveal the next set of selectors waiting to warm up your winter – Over 10 more talented creatures ranging from the last word in grime to veterans of bass and house music…

Prolific denizens of house Catz ‘N Dogz are no strangers to BUGGEDOut! and the all conquering Polish duo and Pets Recordings bosses / Dirtybird affiliates will be out in force at this years Weekender, for one of their electrifying displays of live house bangers. Becoming a very big deal after releasing his debut EP on Dirtybird back in 2009, Bristol bass-house maverick Julio Bashmore is on for the get down, an artist whose meteoric rise and credentials know no bounds, and who is about to release his long anticipated and critically acclaimed debut album ‘Knockin’ Boots’. Fresh from launching their own imprint 17 Steps, London electronic power duo and BUGGEDOut! favourites Dusky will be gracing the decks bringing their forward thinking flavours to the fore.

One finger on the pulse and one foot in the classic past, BUGGEDOut! has long been a brand associated with breaking big names in dance music as well as staying true to its roots so it’s no surprise that the Weekender is welcoming in the new breed melting the boundaries of UK clubland. Making her debut at the Weekender is London based DJ Barely Legal, one of the fastest growing talents on the grime scene. With her mixes heavily on Rinse FM rotation and counting Wiley in her fast ever-increasing fanbase DJ Barely Legal is now hotly in demand and representing all over the world. With a reputation for eclecticism and reinvention, fellow Londoner and grime producer Mumdance will also be making an appearance alongside XL label mate, Novelist – one of the scene’s brightest and most in-demand MCs. The BOW 2016 line-up is shaping up to to be the biggest and boldest in BUGGEDOut! history…

Bugged Out Weekender 2016 Early birds are now SOLD OUT. First wave tickets are on-sale now priced at £169pp and you can book with a £50 deposit. Available via www.buggedoutweekender.net