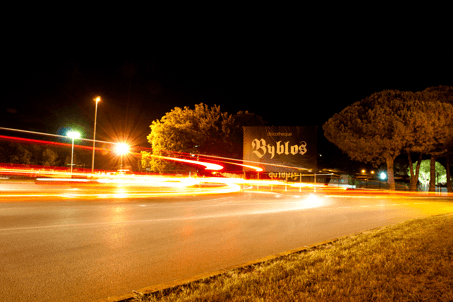 Situated in the beautiful landscape of the Istrian peninsula in the vicinity of Croatian-Slovene border, less than an hour drive from Trieste and Venice in the ancient city of Poreč which links the blue Adriatic and the vastness of surrounding greenery. Set in an idyllic spot where various cultures and ages meet and melt and where top vacation and fun simply cannot but intertwine.

This open plan discotheque lies on four thousand square meters and can accommodate four and a half thousand visitors in want of top quality entertainment. Parking facilities of seven thousand square meters take care of every patron’s need, which is not all – this winter additional works resulted in Byblos enhancing its indoor capacity enabling six and a half thousand people to dance away into the night. In the summer months this area will come handy as an additional dancing ground for both foreign and home anticipated guests.
These are the guiding thoughts by which Byblos is opening its gate this summer with a programme bursting with big happenings catering for all tastes.

The best programme on the peninsula and even wider unfolds in Byblos as early as on the 21st June. The electronic intro kicks off with the producing couple PlayOne the weekend after when you will have the chance to be a part of the making of their new video. On the 5th July witness the grand entrance into the electronic part of the season with DJ Norman Cook, aka Fatboy Slim. In addition, let’s not forget that Byblos discotheque is preparing an ample six-day programme catering for everybody’s music and visual tastes.

Ticket presales available in selected spots will be announced shortly.

Last but not least, we wish to repeat a statement given by one of our many visitors: “Having a chance to be with this group of people yearning for top quality fun and being able to hear A-class DJs evoking happy feelings and memories by their choice of music is an experience which simply must be tasted, whereas the setting of the club itself is a wonder in its own right…”

Most warmly invited to be taken into the summer of 2014