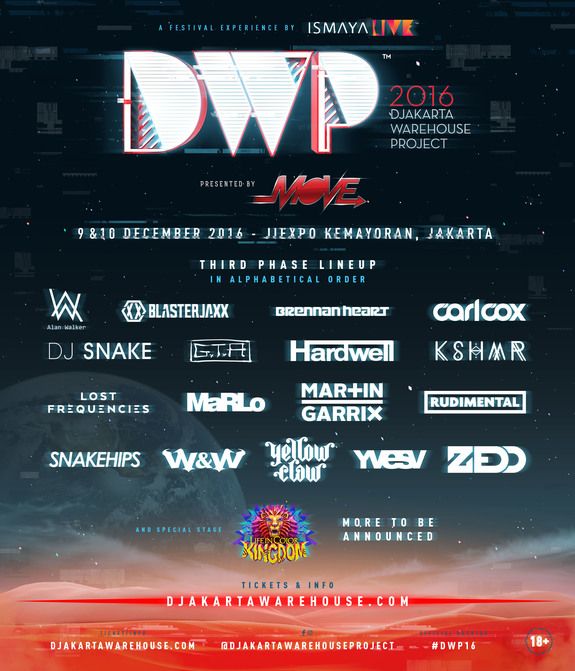 Ismaya Live, the team behind the Djakarta Warehouse Project, raise the bar yet again by announcing the next wave of international artists for the highly anticipated 2016 edition. On December 9-10, over 80,000 revelers from around the world will descend in the nation’s capital to witness some of the world’s finest electronic music acts.

Last year’s record-breaking, sold out event welcomed a dazzling array of DJs and electronic acts to the heart of Southeast Asia, and this year’s DWP looks set to raise the bar even higher.

First up to the join the already announced headliners is the ‘three-deck wizard’ and Ibiza kingpin, Carl Cox, as well as French global megastar DJ Snake, who raised the roof at last year’s DWP, and thus was invited back to deliver yet another electrifying performance. British rising duo Snakehips, drum & bass outfit Rudimental, Belgian DJ Lost Frequencies, and the genre-bending LA based pair GTA will also be taking to the decks to show off their catalogue of unprecedented original hits. If that wasn’t enough, electro house superstars Alan Walker, Blasterjaxx, Brennan Heart, W&W and Yves V will bring their signature high-octane performances to the masses. Last but certainly not least, rising trance powerhouse MaRLo will round off this massive lineup building even further upon DWP’s burgeoning reputation.

Set to grace the colossal grounds of the JiExpo Kemayoran Convention Center this December will also be the Asian debut of “the world’s largest paint party” – Life In Color KINGDOM.

Ismaya Live has teamed up with various hotel partners to give festivalgoers incredible deals on travel and accommodation. Affordable VVIP, travel and hotel packages are now available through bobobobo.com – the Official Hotel Partner of DWP – making the trip to Jakarta possible from almost anywhere in Asia.

For all further information on the festival and travel packages, please visit the official website of Djakarta Warehouse Project at www.djakartawarehouse.com