Carnival Magnifico launches line up for 2019 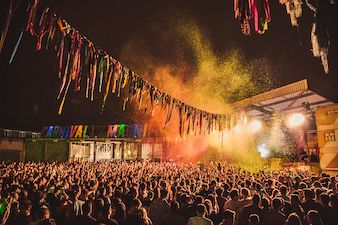 Carnival Magnifico launches line up for 2019

As part of the huge inner city festival event, A Weird & Wonderful Weekender, Carnival Magnifico returns to its spiritual home under the arches at Digbeth Arena, on Friday 7th June, to bring a taste of Rio to the Midlands. With a huge array of talent across 4 stages, amongst an explosion of colour, costumes and outrageous revelry, Carnival Magnifico is not to be missed…

The West Midlands’ very own Carnival event returns to its spiritual home under the arches at Digbeth Arena, on 7th June, as part of the huge, A Weird & Wonderful Weekender, and celebrates with a massive line up of talent and entertainment. Confirmed to bring the Rio vibes in The Carnival Arena are; Shy FX featuring Dynamite MC, Toddla T, General Levy (celebrating 25 years of ‘Incredible’), UK Apache (celebrating 25 years of ‘Original Nuttah’), LFM and Mali. The Hip-Hop Warehouse sees a rare hip-hop set from Jaguar Skills, alongside Patrick Nazemi and Sexy Kitchen Party, while The Disco Box hosts PBR Streetgang and O’Flynn. Disko Haus takeover the Sunset Terrace. With 5000 cool and colourful party people there to enjoy a spectacular carnival atmosphere, including samba band, fire breathers, LED performances, giant balloon drops, immersive entertainers, Rio Carnival dancers and much more, Carnival Magnifico is all set to live up to its name once again. Tickets start from just £22.50 (pre-sale 18th February at 10am and general sale 19th February at 10am) from www.carnivalmagnifico.com.

Carnival Magnifico kicked off in the summer of 2016 and has been bringing the magic of carnival to the streets of Birmingham every summer since. This year’s event is also the first day in A Weird & Wonderful Weekender, two days of events curated by Weird Science, the Birmingham promoters who continue to deliver some of the UK’s best music and arts events, including MADE Festival, providing a showcase for much of the Midlands’ creative talent. Saturday in the Digbeth Arena will be jampacked again as an array of renowned DJs (DJ EZ & Gorgon City announced so far) and arena hosts such as Hospitality and Lengo turn up across the day for A Weird & Wonderful Day Out.
Once partygoers have got their glitter and sparkling carnival outfits on, they will head to Carnival Magnifico to enjoy Shy FX, with the original jungle legend on a high after his recent massive collab ‘Roll The Dice’ ft Stamina MC and Lily Allen. Sheffield’s finest, Toddla T will bring his dancehall influenced vibes to get the carnival crowds jumping, while the inimitable General Levy will test the soundsystem to its limits as he celebrates 25 years of his seminal hit ‘Incredible’. Not be outdone, UK Apache will take to the stage to celebrate 25 years of ‘Original Nuttah’ which was the breakout club anthem for himself and headliner, Shy FX.

For a dose of hip-hop guests will head over to The Hip-Hop Warehouse where they can catch a rare hip-hop party mash-up set from the master of turntablism himself, Jaguar Skills, alongside Patrick Nazemi and his bass-heavy grooves, and Sexy Kitchen Party, mixing up old and new like a chef creates a stew.
If Disco is the aim, then the coolest boogie boys on the block, PBR Streetgang, will deliver as they headline The Disco Box, ably supported by rising star, O’Flynn. Birmingham’s own Disko Haus night carries on the party vibes as they take over The Sunset Terrace.

Everyone loves the carnival and the indoor / outdoor metropolitan festival set up of Digbeth Arena allows for something special. Everyone can get involved with face painting, glitter bar, bubble machines, bouncy stilts, confetti showers; colourful and creative, this is a carnival in every sense of the word. With incredible live performers including a samba band cranking up the atmosphere, death-defying fire breathers, electrifying LED performances and the classic Rio Carnival dancers transporting the crowds to Latin-flavoured heaven, Carnival Magnifico is a true marvel for the senses.

It’s time for the Carnival massive to start planning their outfits. There’s no better way to kick off A Weird & Wonderful Weekender.